The inductor has low DC resistance and extremely high AC reactance. Thus, ripples get filtered through choke coil. Some of the residual ripples if present in filtered signal from inductor coil will get bypassed through the capacitor. The reason behind this is that capacitor allow AC and block DC.

Choke filter came into existence due to shortcomings of the series inductor and shunt capacitor filter. A series inductor filter filters the output current but reduces the output current (RMS value and Peak value) up to a large extent. And the shunt capacitor filter performs filtering efficiently but increases the diode current. The excess of current in a diode may lead to its destruction.

Thus, for better performance, we need a filter circuit in which ripple factor is low and do not vary with the variation in load resistance. This can be achieved by using the combination of series inductor filter and shunt capacitor filter. The voltage stabilization property of shunt capacitor filter and current smoothing property of series inductor filter is utilized for the formation of choke filter or L-section filter.

When the pulsating DC signal from the output of the rectifier circuit is feed into choke filter, the AC ripples present in the output DC voltage gets filtered by choke coil. The inductor has the property to block AC and pass DC. This is because DC resistance of an inductor is low and AC impedance of inductor coil is high. Thus, the AC ripples get blocked by inductor coil.

Although the inductor efficiently removes AC ripples, a small percentage of AC ripples is still present in the filtered signal. These ripples are then removed by the capacitor connected in parallel to the load resistor. Now, the DC output signal is free from AC components, and this regulated DC can be used in any application.

If the inductor of high inductive reactance (XL), greater than the capacitive reactance at ripple frequency is used than filtering efficiency gets improved. 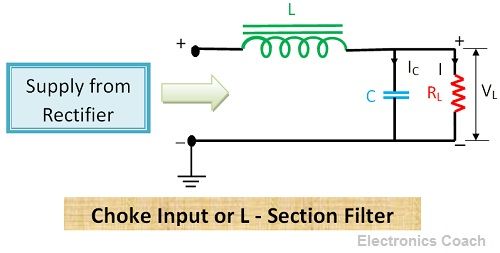 The waveform of DC output signal with a filter and without filter is shown in the below diagram. 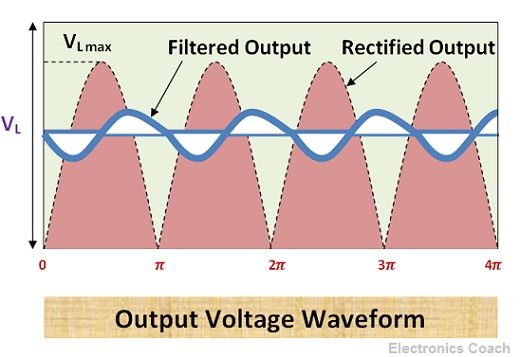 The most effective way to minimize the ripple factor is to increase the value of inductive reactance. The combined reactance of load resistor and capacitor can be minimized up to a large extent by using the capacitor of low reactance so that the complete AC signal get bypassed through the capacitor and regulated DC voltage can be obtained across the load resistor. In these conditions, the net impedance will be due to inductor coil and that will be approximately 2ωL i.e. XL= 2ωL. 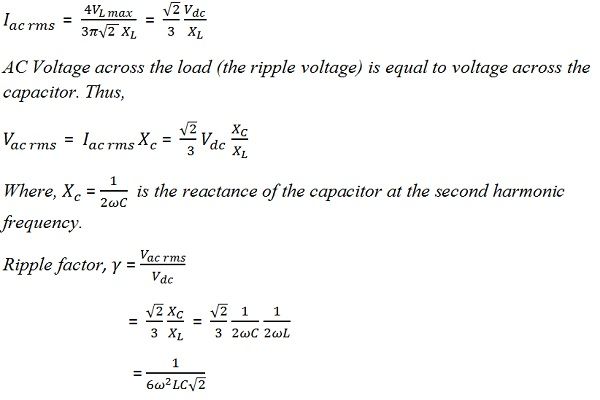