Dielectric Heating is a process of electric heating by which the temperature of a dielectric (non-conducting) material is raised by the application of an alternating electric field (high voltage ac signal). The increase in temperature results in heating the substance which is in contact with the external field.

Whenever we hear the word ‘fire’ then the first thing that we understand from it is something related to ‘heating’. So, basically, the fire was one of the major elements that was used in earlier days by human beings for purposes like cooking food, moulding, or welding of metals, etc.

However, with various technological advancements in recent years, so many alternatives have come into existence to perform such applications without the need for fire. Dielectric Heating is one of the valuable inventions relative to this field as through this a new way has evolved for such processes without the involvement of fire.

Dielectrics are basically insulators that possess very poor conducting ability relative to electric current. We know that every matter in this universe is composed of molecules whose elemental particle is an atom.

When an external field is not present then the polar molecules within a material are randomly positioned within it. However, by applying an electric field, the material gets polarized, this is because the dipole moments of polar molecules get properly oriented. Now the question arises – how this happens?

Dielectric Polarization is nothing but the presence of polar molecules in the proper orientation. To understand this, consider the figure shown below:

Here there are two conductive plates separated by dielectric material in both images.

The principle of operation of a dielectric heater is such that a non-conducting material is present between two electrodes and an external electric field is applied across these two electrodes. Basically, a wide range of frequency is provided to the electrodes.

The dielectric material which is present between the two electrodes can be anything such as wood, plastic, glass, etc. Though it is considered that a dielectric does not allow the flow of electric current through it, practically, it is not possible.
So, whenever these materials are provided with a high voltage alternating supply then even minute motion of charged particles results in the flow of current which leads to dielectric losses. This resultantly produces heat within the material.

We have already discussed induction heating (which is also a type of electric heating) in our previous content where the principle of electromagnetic induction is used to heat up the magnetic material without making direct contact with the source.

The figure below shows the circuit arrangement of a dielectric heater which is formed by encapsulating an insulating material between two conducting plates forming a parallel plate capacitor arrangement. 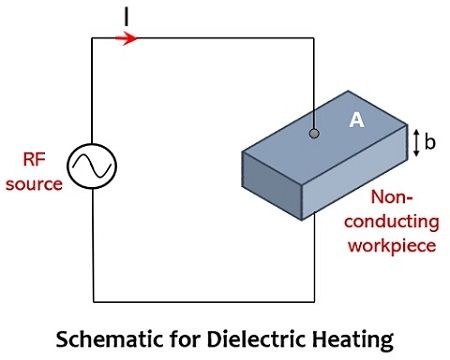 Here a very high-frequency ac voltage signal i.e., 20KV with frequency ranging between 10 to 50 MHz is provided across the whole capacitive arrangement.

We have already discussed that dielectric loss results in the generation of heat. Now, the question arises – when this dielectric loss becomes this much significant that it heats up the insulator?

So, generally, when sinusoidal voltage is provided to the capacitor shown above then the capacitor draws some current. However, this current never leads the voltage by exactly 90°. This means that there exists some in-phase relationship between the supplied voltage and the flowing current. This resultantly produces power loss within the dielectric of the capacitive plates.

At the ordinary frequency range of 50 Hz, this loss is not that significant that it can cause heat generation and so can be neglected. However, at larger frequencies i.e., in the megahertz range, the loss becomes quite large and this heats up the dielectric. This property of the whole configuration is utilized for the purpose of heating the dielectrics (insulating materials).

The equivalent circuit and the phasor for the above-shown schematic are given below: 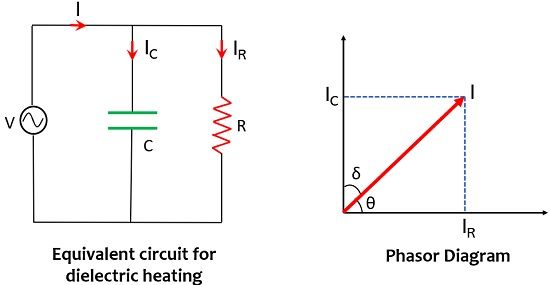 The power dissipated within the dielectric material will be given as:

And substituting the value of I from IC = I sinθ in the above equation, we will get,

Furthermore, the above equation will be written as:

Suppose, the dielectric slab is of width b (in m) with area A (in m2) having permittivity ε (in farad/m), then its capacitance will be,

Substitute the value of IC,

Also, putting, the value of C,

Thus, the power loss per unit volume will be,

For the width of dielectric in cm,

For a capacitor, with small loss angles,

Thus, from this equation, we can say that the power loss per unit volume of dielectric is directly proportional to

The various applications of dielectric heating are as follows:

This is all about dielectric heating.