Definition: Induction Heating is a contactless electric heating process where electrically conductive materials are heated by the principle of electromagnetic induction. Here heat is generated within the conductive material without making direct contact with the source.

We all are aware of the fact that earlier, the heating process that was mostly in use needs direct contact between the metal to be heated and the flame. More specifically, we can say that non-electric heating requires a direct placing of metal over the flame. However, induction heating allows inducing heat within the metal by the circulation of electric current.

Before proceeding further, we must know the perks of electric heating over other methods of heating.

This high-frequency heating mechanism is sub-classified into two categories namely,

However, our concerning topic here is induction heating which we will discuss in detail.

The operating principle in induction heating uses both the principle of Faraday’s law of electromagnetic induction and the concept of Joule heating.

Its operation is quite similar to the transformer that follows faraday’s law. In transformers when primary winding is energized then the flow of current through it leads to the generation of the alternating magnetic field. The created magnetic flux when gets linked with the secondary winding generates emf within the secondary winding, and current starts flowing through it. Here the strength of the magnetic field shows dependency on the magnitude of the applied electric field.

It is to be noted here that no direct contact exists between the two coils however, they are magnetically coupled which results in the flow of current through the secondary winding of the transformer.

Furthermore, according to the joule effect, when current flows through a material then its internal resistance opposes the flow hence power is dissipated in the form of heat.

Before discussing the operation of induction heating you must note here that the material that gets heated is known as a workpiece and the coil around the workpiece that induces a current in it is called a workcoil.

Induction heating takes place in a way that initially when a high-frequency alternating current is passed through the coil (which acts as primary winding) then an alternating magnetic field surrounds the coil and flux is generated. This happens due to the law of electromagnetism. Now, the workpiece (behaves as a single piece short-circuited secondary winding) is placed within the coil as shown in the figure below: 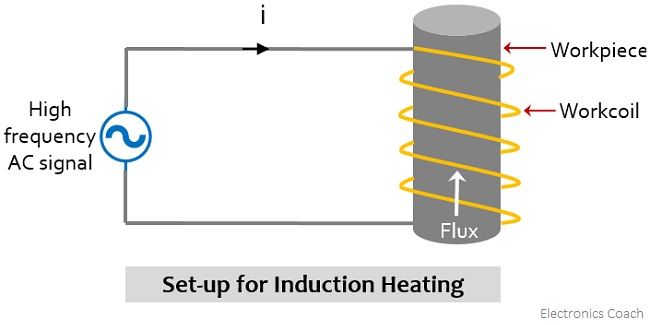 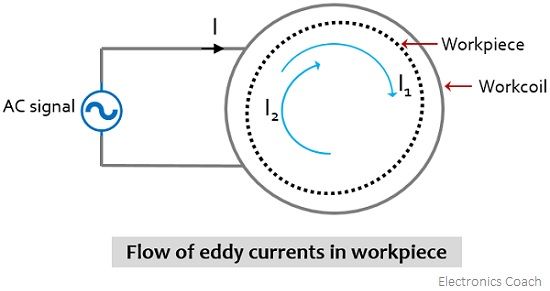 However, during the flow of current, there will be an opposing force to it i.e., finite resistance and this leads to the dissipation of power in the form of heat through the material and this effect is known as Joule Effect. 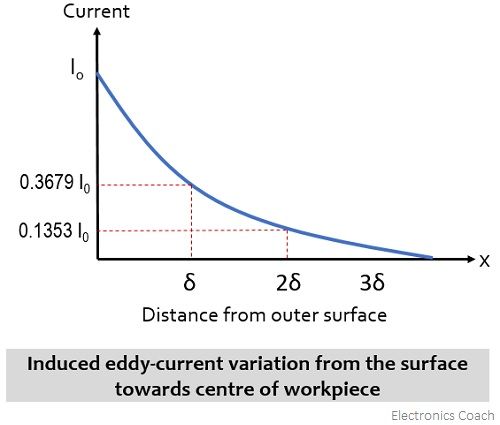 The above graphical representation clearly shows that when the distance increases then the current density gradually decreases.

Suppose l and d are the length and diameter of the cylindrical workpiece. The work coil has an N number of turns, carrying current I.

From Lenz’s law, the direction of induced eddy current in the cylinder will oppose the vertical flux IN. Here eddy current I2 is the secondary current with a single turn. Thus, considering no end effects,

The power loss in the workpiece,

The length is along the direction of flow of current and the area is the circumference of the circular workpiece i.e., πd.

If δ is the penetration depth, then the area normal to flow of current I2 is lδ thus,

We have recently discussed that the magnitude of induced current decreases with an increase in distance from the surface. Thus,

: I0 is the current at the surface in ampere,

x denotes the distance from the surface in meters,

δ is the penetration depth,

I(x) is the current at a distance x from the surface.

Suppose Ps is the power entering the metallic cylinder per square meter of area πdl, then

The expression for the depth of penetration is given as:

ρ is the resistivity of the workpiece and

f is the supply frequency.

On substituting the value of δ in the expression of Ps, we will have,

Thus, the factors affecting induction heating will be: 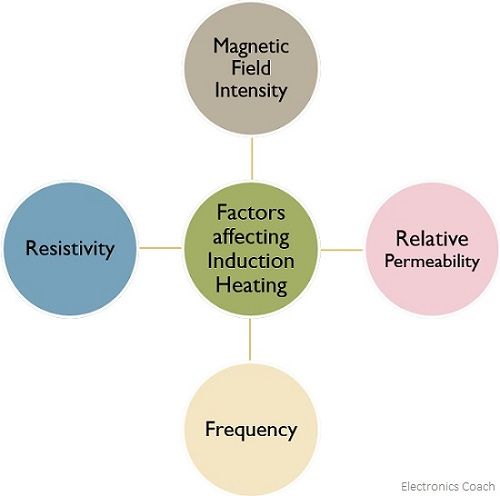 Hence, for the high value of H, f, and μr and ρ, more amount of heat generation takes place via induction heating.

A widely famous use of induction heating is in induction cooking that offers cooking with minimal dissipation of heat in the surrounding. Along with this, induction heating is used for the purpose of forging, annealing, welding, soldering of metals, as well as brazing of different metals. It is also used in hardening of steel, sintering, and sterilization of medical equipment, etc.