A thyristor is a semiconductor device which possesses high ratings of voltage and current and also possesses the ability to handle large power. On the contrary, the transistor cannot handle large power equivalent to that handled by a thyristor. Moreover, the current and voltage rating of transistors is also quite low. Thus, power handling capacity differentiates both these devices.

Although, thyristor and transistor both are the crucial devices for switching applications but still due to differences in their characteristics they have their own area of applications.

Another difference between thyristor and transistor which is evident in its constructional feature is that thyristor is formed by four layers of P-type and N-type material arranged in an alternative manner. On the other hand, a transistor is formed by sandwiching a layer of either P-type or N-type semiconductor material between the layers of N-type and P-type material respectively.

Now, you must have got the rough idea about the differences between thyristor and transistor. But differences do not end here; there are a lot of another difference between the above mentioned four layer and three-layer device. We will discuss all those with the help of comparison chart.

But before, I indulge into comparison chart, let’s have a quick look at the roadmap of this article. 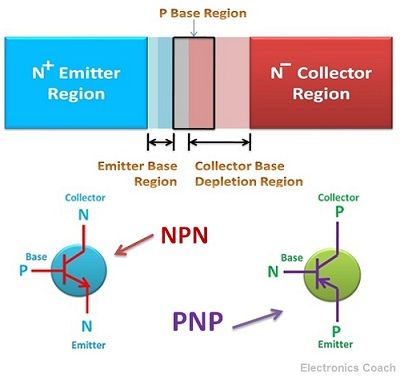 The emitter terminal is heavily doped and thus consists of a large number of charge carriers. These carriers flow towards the collector via base region and due to this current flows in the transistor. Transistor operates in three regions active region, saturation region and cut off region.

Key Differences between Thyristor and Transistor

What if you will use thyristor for high-frequency application switch? It will result in poor efficiency of the resulting circuit. Therefore, we can utilize the devices in an appropriate application only when we are acquainted with the differences between them.