An encoder is a device that converts the active data signal into a coded message format. However, a decoder performs inverse operation of the encoder and thus converts the coded input into original data input.

In order to have secured data transmission, encoders and decoders are employed in a communication system. The encoder and decoder perform encoding and decoding of data at transmitting and receiving end respectively.

It is a combinational circuit that is used to convert the input signal in the form of coded output (digital data stream). An encoder consists of ‘2n’ number of input lines but has only ‘n’ output lines. When an input signal is applied to an encoder then logic circuitry involved within it converts that particular input into coded binary output.

The figure below shows the basic structure of an encoder:

Let us move further and have a look at 4 to 2 binary encoder that is shown below: 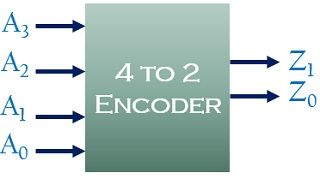 As we can see the four inputs provided to the encoder are A0, A1, A2, A3 and the 2 outputs are given as Z0 and Z1. It is noteworthy here that to have the particular binary code at the output of the encoder, out of the 4 inputs, only one of them can be high, for a given time.

As we have already mentioned in the previous paragraph, that among all four, only one input will be 1 at a given time. This we can see in the truth table shown above.

Thus, the Boolean function for each output is given as 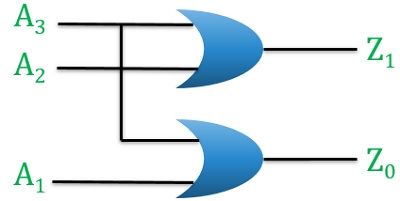 Despite its advantage of providing the coded output, an encoder sometimes proves as a disadvantageous circuit and results in incorrect code, when 2 or more than 2 inputs are active high.

A decoder is also a combinational circuit as encoder but its operation is exactly reverse as that of the encoder. A decoder is a device that generates the original signal as output from the coded input signal. It basically decodes the coded bits into another format.

A decoder converts n bit coded data inputs into 2n output lines. The particular coded data is converted into original information signal with the help of internal logic circuitry involved within the decoder.

Let’s have a look at the basic decoder circuit:

Now, we will discuss 2 to 4 binary decoder in order to have a better understanding of decoders 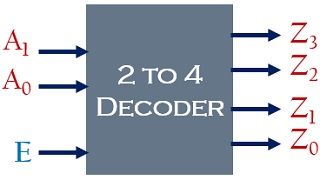 Here, the applied inputs to the circuit are A0 and A1 that provides 4 outputs namely Z0, Z1, Z2, Z3 and E shows the enable signal of the decoder.

Thus we will have the truth table for 2 to 4 decoder as shown below:

Here, as we can see in the first row of the truth table that the enable terminal is low, thus no any input is fed to the device. Resultantly, which provide no result at the output. Hence, each combination of input will provide us high output when E will be high.

Hence the Boolean function for each output is given as: 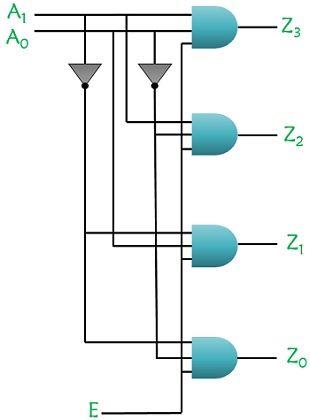 Key Differences Between Encoder and Decoder

As we are aware of the fact that both are combinational circuits but the operation of the two is exactly reverse of each other. One performs encoding of the original information signal, while the other decodes the coded data bits in order to have the exact message signal.