We will discuss other crucial difference between combinational and sequential logic circuit with the help of comparison chart, but before that let’s have a look at the topics covered in this article.

A combinational logic circuit has NAND, NOR, and NOT logic gates. These are the building blocks of the digital circuitry. A combinational circuit provides the variety of operations such as the arithmetic operation of two operands, transmission of data, conversion of code etc.

With the help of logic gates, the combinational circuit performs an operation like addition, subtraction or code conversion from binary to BCD, BCD to binary etc. The output of the combinational logic circuit can be described in various ways such as Boolean algebra, truth table, and logic gates.

The combinational circuit can take any number of input and the output generated from the circuitry is dependent on the state of the input. Any change in the input will also be reflected in the output terminals.

The sequential logic circuit also involves memory elements along with the logic gates. Thus, the output generated by the sequential circuit depends not only on the present state of the input but also on the previous outputs. 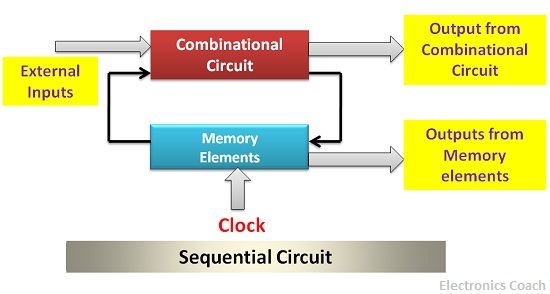 When you select a particular channel the Television receiver keeps the track of the previously selected channel and according to that, the next channel is selected.

Synchronous Sequential Logic Circuit is the one in which the output is generated with the input and the clock signal. A clock signal is given in the definite time interval. On the contrary, the asynchronous sequential logic circuit generates the response at any time whenever there is a change in the input terminals.