When we talk about the operating principle and characteristics then the two are almost similar. Although some aspects differentiate the two. MOSFET is basically an advanced version of FET. It was simply invented to overcome the disadvantages of FETs.

Both finds its applications in amplification of electric signals as they have the ability to change conductivity with respect to the voltage applied.

Till now we have discussed crucial factors that discriminate FET from MOSFET. Now, let’s move further and discuss other important difference between FET and MOSFET using the comparison chart.

JFET is an acronym for Junction field effect transistor. The device consists of 3 terminals gate, source and drain.

In a JFET, an electric field is applied across the gate terminal that controls the flow of electric current. The current that flows from drain to source terminal is proportional to the applied gate voltage.

JFETs are basically of two types basically N-channel and P-channel.

The voltage applied across the gate to source terminal allows the electron to move from source to drain. Thus a current from drain to source flows that is termed as drain current ID.

When gate terminal is made negative with respect to the source, the width of the depletion region increases. Thus allowing less number of electrons to move from source to drain as compared to no bias condition. 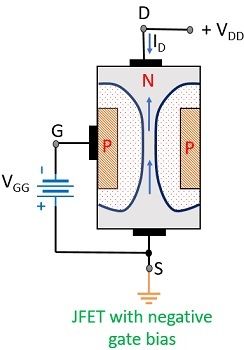 As more negative gate voltage is applied the width of the depletion region will further increase. Due to this, a condition is reached which cuts off the drain current completely.

JFET has a longer life and it possesses higher efficiency.

MOSFET is an acronym for metal oxide semiconductor field effect transistor. Here also the conductivity of the device is varied according to the applied voltage. MOSFET is an advancement of FET.

MOSFETs are of two types

In a depletion MOSFET there exist a pre-constructed channel. So, the applied gate to source voltage switches the device to off condition. 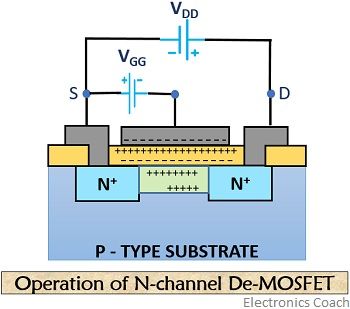 On the contrary, in an enhancement type MOSFET, no any pre-constructed channel exists. Here, conduction starts on the creation of channel by the applied voltage. 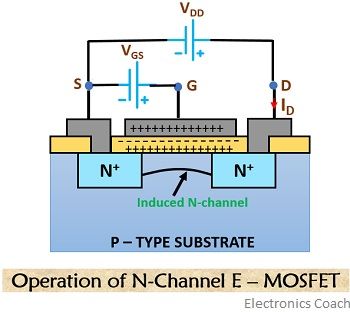 In a D-MOS the negatively applied gate potential increases the channel resistance thus reducing the drain current.  On the contrary, in E-MOS large positive gate voltage is required for its operation.

Key Differences Between JFET and MOSFET

The following points describe the difference between JFET and MOSFET:

From the above discussion, we can conclude that MOSFET is somewhat better than JFET. When we talk about electrometer applications then MOSFETs are more useful than JFETs.