Definition: MOSFET is an acronym for Metal Oxide Semi-Conductor Field Effect Transistor. It is a device in which the variation in the voltage determines the conductivity of the device. It is a semiconductor device that belongs to FET family.

MOSFET is also known as IGFET i.e., insulated gate field effect transistor. But usually, the word MOSFET is used because most devices are made using Si for semiconductors and gate electrode of metal oxide. It is a three terminal device which has a source, a drain and a gate terminal. These are voltage controlled devices, in which the current flowing between source and drain is proportional to the provided input voltage.

MOSFET is an advanced FET invented to overcome the disadvantages of FET. As FET offers large value of drain resistance with moderate input impedance and delayed operation. On the contrary, MOSFET has a smaller value of capacitance and its input impedance is much more than that of FET due to small leakage current.

It finds application widely in switching and amplification of electronic signals because of its ability to change conductivity with the applied voltage.

Due to the small size of MOSFET, it is most commonly used transistor in digital circuits. The applied voltage changes the channel width. Wider channel width provides the better conductivity of the device.

MOSFETs are of two types:

In depletion type MOSFET a channel is already constructed physically and gate-source voltage is needed to switch the device “OFF”.

In an enhancement type MOSFET, there is no any pre-constructed channel existence is noticed. The voltage applied across the gate is needed to create a channel for its conductance.

Let’s have a look at the N channel depletion and enhancement type MOSFET: 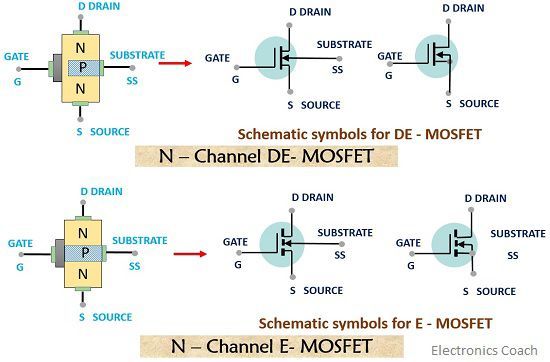 In the same way, we can construct P – channel depletion and enhancement MOSFET also.

As we have already discussed earlier that MOSFET is a member of the FET family. It has a gate terminal which is made insulated by an oxide layer so as to prevent direct contact with the substrate.

This insulated gate feature of MOSFET is responsible for infinite impedance on the practical basis because no flow of current is noticed in between the gate and the channel.

The diagram shown below describes the construction of a depletion type MOSFET: 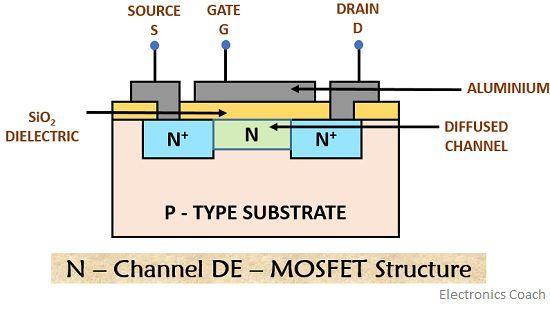 The constructional detail of enhancement type MOSFET is shown below: 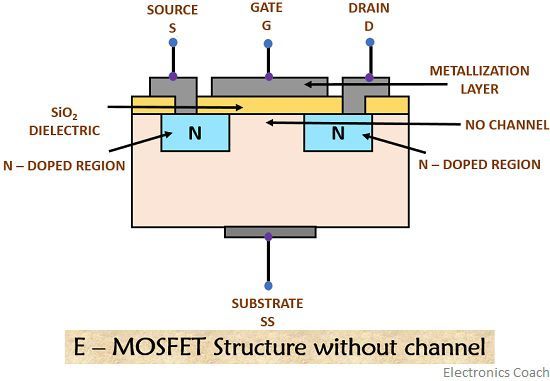 As we can see in the diagrams shown above for the construction of an N-channel DE-MOSFET and N – channel E-MOS, a P-type substrate is used. This lightly doped P-type substrate contains two heavily doped N-type material thus forming source and drain.

A thin layer of SiO2 is deposited over the surface and holes are then cut through SiO2. Metals are deposited through holes which resultantly forms drain and source terminal. A metal plate is also deposited in between the source and drain terminal which acts as gate terminal for the device.

SiO2 is a type of insulator referred to as dielectric, which generates an opposing electric field when subjected to an externally applied field.

The area required by the MOSFET is of the order 0.003µm2 or less and the layer of SiO2 provides an extremely high input impedance of the order of 1010 to 1015 ohms.

In the same way, to construct a P-channel MOSFET, an N-type substrate is taken and is diffused with two highly doped P-type material thus forming source and drain terminal.

The construction for gate terminal is the same as in case of N-channel MOSFET.

Working of a Depletion-type MOSFET

In a depletion type or DE-MOS, a channel for conduction is already constructed physically. Due to this, current flows in between the source and drain without any gate bias voltage.

This means that the channel conducts even when VGS = 0.

The diagram shown below will help you to understand DE-MOS in a better way: 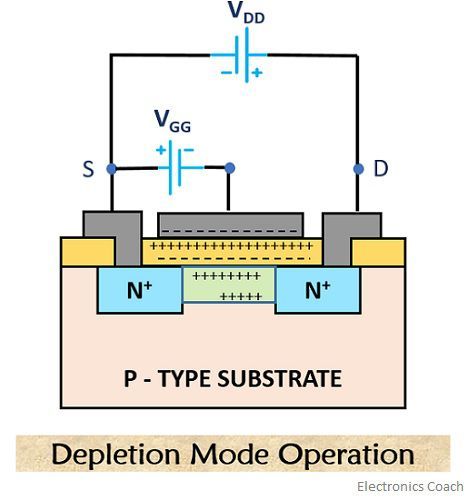 DE-MOSFET has the ability to work at both positive and negative gate potential. When the MOSFET is operated with 0 gate voltage it is said that the device is operating in E-mode.

In a DE-MOSFET when the gate potential is made negative with respect to the substrate, it causes repulsion of negative charge carriers out of the initially formed channel. This increases the channel resistance which resultantly reduces the drain current.

So, from the above discussion, we can conclude that in a DE-MOS, more negative the gate voltage, the less the drain current that flows through the channel.

In the case when the gate terminal is made positive with respect to the substrate, more number of electrons gets attracted towards the channel. Thus, causing more current to flow through the channel.

A pinch-off condition also arises in DE-MOS when a much negative gate voltage is applied. 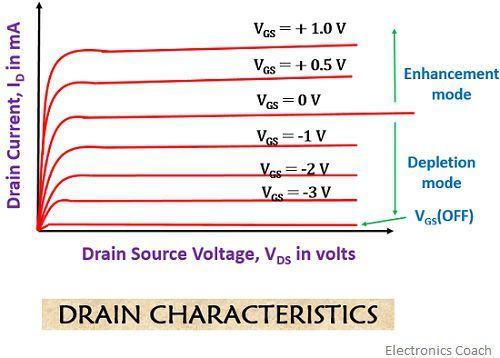 The bottom curve shows the condition when no gate voltage is applied due to which a negligible value of drain current flows from source to drain.

Working of an Enhancement type MOSFET

This is a type of MOSFET in which no any channel is doped between the source and drain at the time of construction as you have already seen in the above figure.

In E-MOS, a positive gate to source voltage is required for the channel to induce electrically. It requires large positive gate voltage for its operation.

E-MOS has its wide application in digital electronics field and computers.

The below-shown diagram indicates the working of an E-MOSFET: 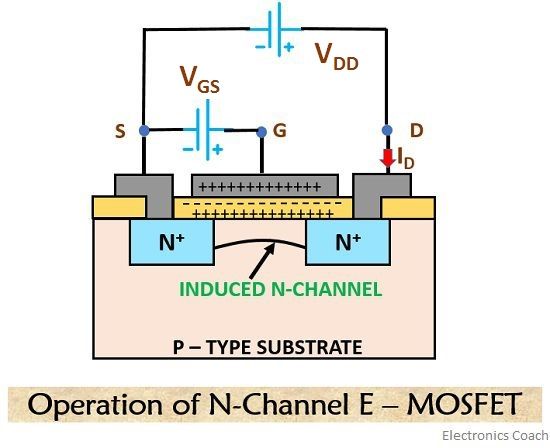 When the gate to source voltage is made 0, E-MOS does not conduct. Due to this reason, it is called normally-off MOSFET. When the positive gate voltage exceeds the threshold value then drain current starts to flow through the device.

Consider a case when a positive drain to source voltage is applied and the gate terminal is at 0 potential. In this case, the P-type substrate and the two N regions behave as two PN junctions connected back to back and P substrate provides the resistance.

In this condition, both junctions cannot be forward bias simultaneously leading to very small drain current which is a reverse leakage current.

Let us now move further and consider the case when the gate is made somewhat positive with respect to the source. The minority charge carriers of p-type substrate i.e., electrons get attracted by the positive potential of the gate.

These negative carriers accumulate or gather at the surface of the substrate just below the gate terminal. Any further increase in the VGS will cause more electrons to deposit under the gate.

Since dielectric is used so these electrons cannot be able to flow across the insulating layer of SiO2. Thus they accumulate at the surface of the substrate itself. Thus, an N-channel is made between source and drain by the accumulation of minority charge carriers.

So, by the above discussion, we can conclude that ID is controlled by the gate potential VGS. It is called enhancement MOSFET as the channel conductivity is enhanced by the positive gate potential. 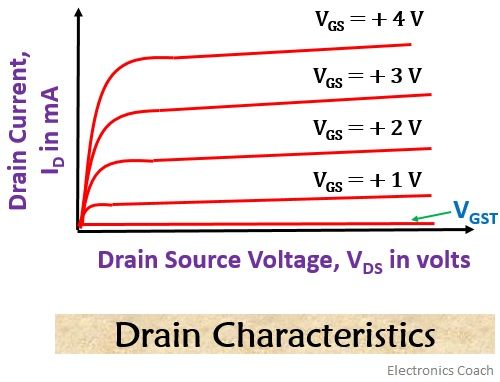