Although the thyristor and thyratron both are three terminal devices still the construction of the gate terminal of the thyratron and thyristors are different because one is current controlled semiconductor device while the other one is a non-semiconductor voltage controlled device.

The other important difference between thyristor and thyratron is described with the help of comparison chart in this article.

A thyratron is a non-semiconductor device which consists of a tube filled with gases. It also consists of a filament, a grid and two other terminals i.e. cathode and anode. Thyratron came into existence after vacuum tubes. 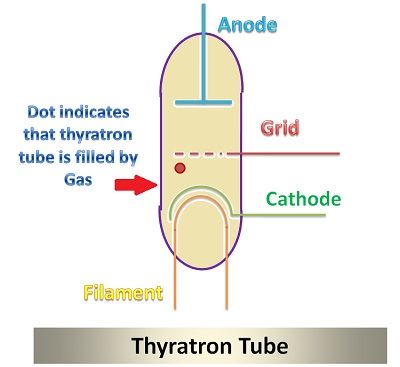 Like vacuum tubes,  thyratron can provide rectification and switching in the electronic circuit but they cannot amplify the signal like a vacuum tube do. Besides, the power which a thyratron tube can handle is much greater than that of the vacuum tube.

In this way, a thyratron tube help in achieving rectification and switching task. Apart from large power handling capabilities of thyratron tube, it also has some disadvantages like bulky device and less reliability. As the consequence of drawbacks of the thyratron, thyristors came into existence. 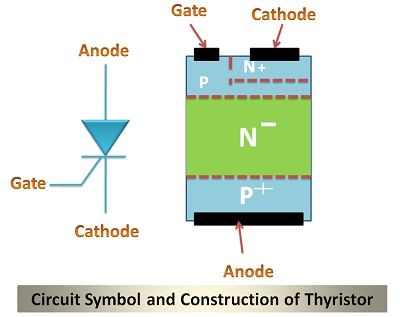 A thyristor is a device which is used for rectification of the signal as well as for switching of the signal. It cannot be used to amplify the signal. The four-layer structure of thyristors makes it appropriate for various high power application because of its high current and power rating. Moreover, the use of thyristor in power electronics is due to high power handling capacity.

The thyristor can be understood as the two transistors connected to each other in such a way that the collector of the one is connected to the base of other. Initially, we have to supply voltage to one of the transistors and as soon as it is triggered it will trigger another transistor.

The crucial point here is we can understand the working of the thyristor with the help of transistor but thyristor cannot participate in amplification of the signal like a transistor.

Key Differences Between Thyristor and Thyratron