Definition: A Digital Comparator is a combinational logic circuit that is used for comparison of two binary values. Basically it generates the desired signal (either low or high) at the output when compares two digital values provided at its input.

Majorly a digital comparator is of two types:

Here in this section, we will discuss the detailed idea of the digital comparator.

A digital comparator that compares only the equality of two applied signals at its inputs is known as identity comparator. It has 2 input and only 1 output pin. The output pin shows a logic high signal when the two values are equal otherwise it shows a low signal.

More specifically, we can say,

For two inputs P and Q, if

Suppose P and Q are the two inputs of magnitude comparator. And the 3 outputs will be P > Q, P = Q and P < Q. And depending upon the comparison performed, any one of the given outputs will be high.

The figure below represents the block diagram of a magnitude comparator having 2 inputs P and Q:

As we can see that for 2 binary input of 1-bit each, we are having 4 possible combinations. And therefore depending on the comparison performed on P and Q, the magnitude comparator makes high any one of the output pins among the three.

It is clear from the truth table shown above that when both the inputs are same i.e., either 0 or 1, then pin 2nd which is showing equivalency between the two value in comparison becomes high.

Let us now see the K-map representation of 2 input Comparator: 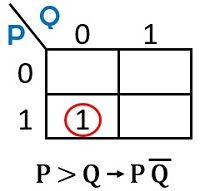 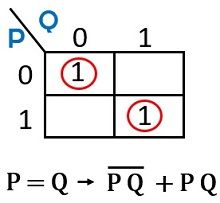 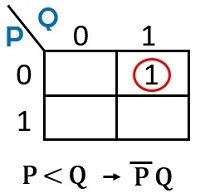 The logic circuit for the 1-bit comparator is given as: 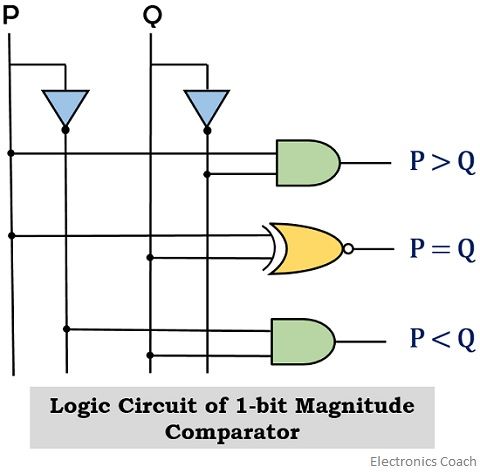 For two inputs of 2-bit each, we will have 16 possible combinations. Therefore, in this case, the output will show high and low value depending on the comparison of the 2-bit value of binary input. 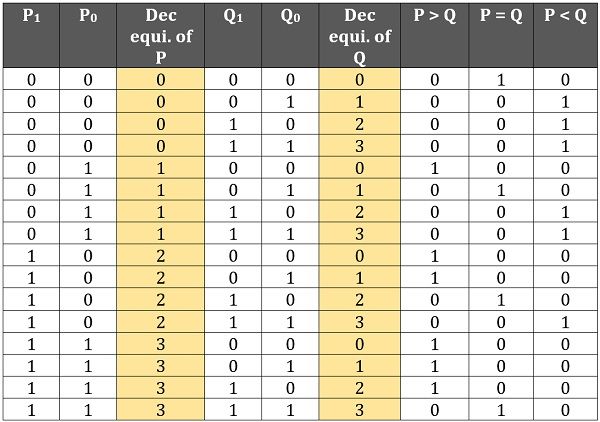 Here we have provided the decimal equivalent of 2-bit binary values for both inputs P and Q in order to have simplicity in comparison.

By observing the table, you can clearly check the different conditions for which the respective output is high.

While when the magnitude of Q is greater than P then the respective pin representing P<Q will be high rest others will be low.

So, in this way comparison between two given inputs is performed by a magnitude comparator.

Let us now see the K-map representation for all the 3 outputs separately: 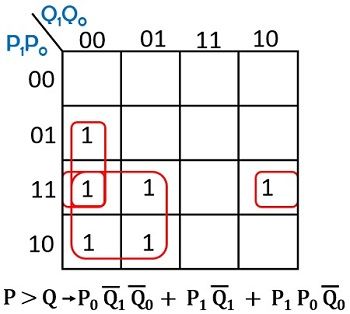 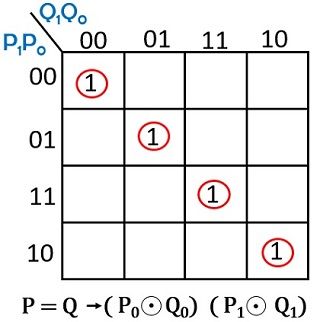 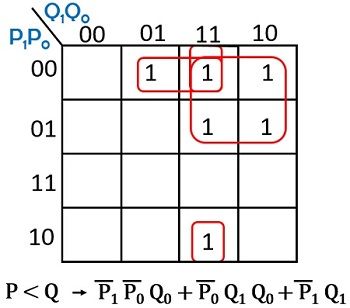 So, on observing the boolean expressions realized from the K-map, we can have the respective logic circuit.

The logic circuit is given as: 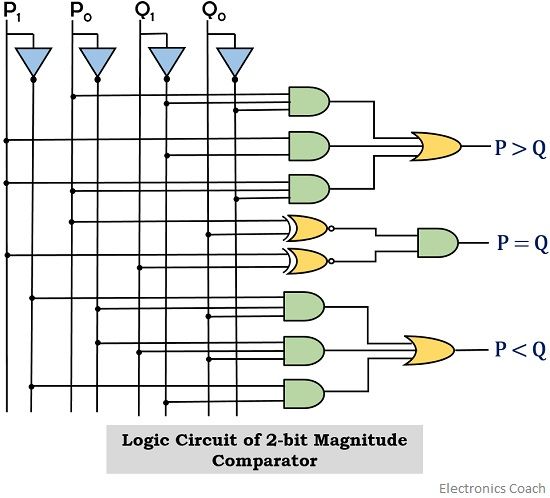 Sometimes we come across problems like how to find the number of possible combinations of logic high for P > Q, P < Q or P = Q. And it is not possible all the time that we make a truth table for that particular number of bits and then count the logic high for that respective output.

So we can use a generalized expression for the total combinations of 2 inputs, n-bit each.

As we have 2 inputs of n-bit each therefore in total we have 2n number of bits.

Hence, we will have the possible combinations as:

As seen in the previous section of the 2-bit comparator, there were total 4 (i.e., 22) combinations at the output for which the two inputs were equal (P = Q).

So in the case of n-bit, we can say

: 22n is the total possible combinations of n bits.

Also, it is to be noted here that the number of combinations where P>Q is equal to P<Q.

Therefore, it can be given as

Suppose we have two inputs of 3-bit each, so in this case

And thus out of 56 combinations, total 28 times 1st input will be greater and for rest 28 combinations the other.

In this way, we can have a comparison for a higher number of bits.