Definition: Half Adder is the digital circuit which can generate the result of the addition of two 1-bit numbers. It consists of two input terminal through which 1-bit numbers can be given for processing. After this, the half adder generates the sum of the numbers and carry if present.

It is very easy to guess the working of the adder just by its name. This is because the word adder consists of keyword “ADD” which means to add any numbers. But what does this keyword “HALF” signifies. You might have confronted this question while going through digital electronics. Let’s discuss what does this mean.

The word “HALF” before the adder signifies that the addition performed by the adder will generate the sum bit and carry bit, but this carry from one operation will not be passed for addition to successive bits. Therefore, it is called half adder.

Although, the major significance of adder is that it can perform addition but apart from this it is also used in processors of computer systems for address decoding. We will also discuss other crucial application later in this article. 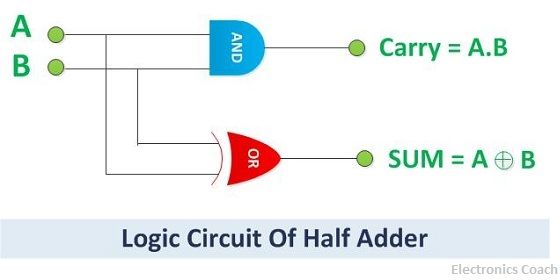 The NAND operation can be understood more clearly with the help of equation given below. These equations are written in the form of operation performed by NAND gates. 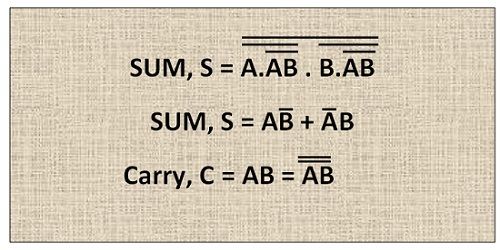 Half Adder using NOR Gates

The NOR gate is also a universal gate. Thus, it can also be used for designing of any digital circuit. The Half adder can be designed using 5 NOR gates. This is the minimum number of NOR gates to design half adder.

The operation of the above circuit diagram can be understood more clearly with the help of equation. The sum bit and carry bit can be written in terms of NOR operations performed by the logic gates.

The Half adder can also be constructed using basic gates such as NOT gate, AND gate and OR gate. To understand how to interconnect them so that they constitute Half Adder we should be acquainted with the resulting operation of sum bit and carry bit.

The resulting carry bit of the addition is nothing but the AND operation of both the inputs. And the resultant sum bit is the EX-OR operation of the operands. To design such a circuit which produce the desired result we need 3-AND gates, 2-NOT gates and 1-OR gate.

The NOT gate will negate one of the input and combine with another original input and passes through NAND gates. It must be noted that we need two NOT gate because only one input in negated form will be passed from one NOR gate. To generate the negation of another input we need another NOT gate.

Application of Half Adder

Half Adder is used in the arithmetic logic unit of the processor of the computer system for performing arithmetic operations of input. Besides, it is also used in calculators for the addition of number, in address decoding in processors, calculation of table indices etc.