Definition: The Half Subtractor is a digital circuit which processes the subtraction of two 1-bit numbers. In this, the two numbers involved are termed as subtrahend and minuend. In the subtraction procedure, the subtrahend will be subtracted from minuend. The circuit of Half subtractor consists of two inputs and two outputs.

The inputs of the half subtractor circuit will be subtrahend and minuend. On the other hand, the output will be the difference and the borrow.

The word “HALF” before the subtractor signifies that it deals with only two 1-bit numbers, it has nothing to do with the borrow from the previous stage. The logic symbol of half subtractor is represented in the diagram below. 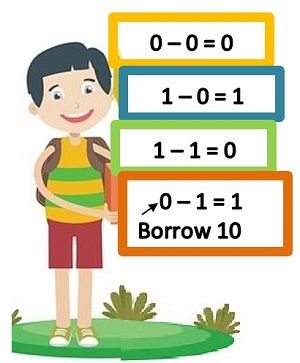 The above image clearly elaborates the subtraction rule of binary numbers. Let’s take an example of subtraction of two multi-bit number with the help of above-defined rules.

Circuit of Half Subtractor

If we observe carefully, it is quite evident that the difference operation performed by half subtractor is exactly similar to the operation of EX-OR gate. Thus, we can easily utilize the EX-OR gate for generating difference bit. Similarly, the borrow generated by half subtractor can be easily obtained by using the combination of NOT gate and AND gate.

Truth Table of Half Subtractor

The resultant of all the 4 inputs will be described as outputs. The output of half subtractor is described in two columns. One will signify the difference bit, and another will signify the borrow bit. To derive the truth table, just use the EX-OR operation of two inputs for generating difference and NOT followed by AND operation for generating the borrow bit.

Equation of Half Subtractor

The key point which is to be kept in mind while designing the circuit using universal gate is that the architecture in which it is to be connected so that it performs the desired operation. The total of 5 NAND gate are used for designing of Subtractor circuit.

Half Subtractor using NOR gates

The below diagram illustrates the connection of NOR gates to form the Subtractor.

The general thinking which dominates is that subtraction is harder than the addition that is the reason that subtractors are not much popular in comparison to half adders. This is because the subtraction can also be done using addition by using the complement of binary numbers.

Thus, it would not be wrong to say that subtractors are not used extensively. But some of the areas where it finds application is in arithmetic and logic units of processors.