Definition: Distortion in Amplifier basically implies the variation in the waveform received at the output with respect to the applied input. The unwanted alterations generated during amplification is known as distortion.

A pure signal always has a single frequency component where voltage varies positive and negative by an equal amount. If this variation is less than full 360⁰ cycle, then it is said that the signal is distorted.

For a distortionless output signal, dc biasing is required at the base or gate terminal. When dc biasing is employed, the signal is amplified over its entire cycle. The bias “Q point” must fall at the middle of the load line.

Thus, with such a “Q point” setting, type A amplification can be achieved. To have a detailed explanation about class A amplifiers refer to our previous article Power Amplifier.

As we are already aware of the fact that the amplifiers basically amplify small voltage signals in order to provide a larger signal at the output. After amplification, the output signal is the value obtained by the multiplication of amplifier’s gain with that of the input signal.

This is the reason why we get an amplified signal at the output of an amplifier. But the gain of amplifier i.e., β is different for the even similar type of transistor. Thus causing variation of “Q point” from a transistor to other.

Types of Distortion in Amplifier

The type of distortion merely depends on the region of characteristics that are used by the transistor, the reactance of the device and the associated circuit. 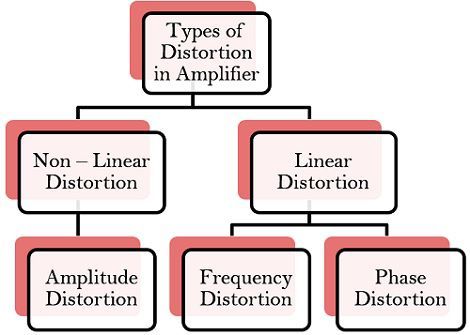 Generally, the system working gets affected only when the amplifier causes excessive distortion.