The transistors that are employed in power amplifiers are termed as power transistors.

To provide the necessary power amplification, Power amplifiers consist of the following three stages as shown below:

Stage 1: Voltage amplification stage:  As the input signal developed by the transducer is of very low value and a higher value signal is needed at the output so input signal is amplified at the very first stage of power amplifiers.

Here, we have used two stages of voltage amplifier so as to amplify the low-value input to the desired level.

Stage 2: Driver stage: The amplified voltage obtained from the voltage amplifier is fed to the driver stage to provide maximum power gain and to facilitate impedance matching.

Stage 3: Output stage: This stage essentially consists of power amplifiers and is responsible to transfer maximum power to the output device.

Power amplifiers are classified as different classes which shows the variation of the output signal with respect to the applied input signal.

In this class of power amplifiers, the output current flows for overall i.e., 360﮲ of the input cycle. It only operates on the linear region of the load as the operating point is so selected which gives us exact output as that of input.

Here, the maximum possible efficiency is of 50%. This class is used when we simply want a distortion-free output.

Let’s have a look at the circuit diagram and basic operation of class A amplifier: 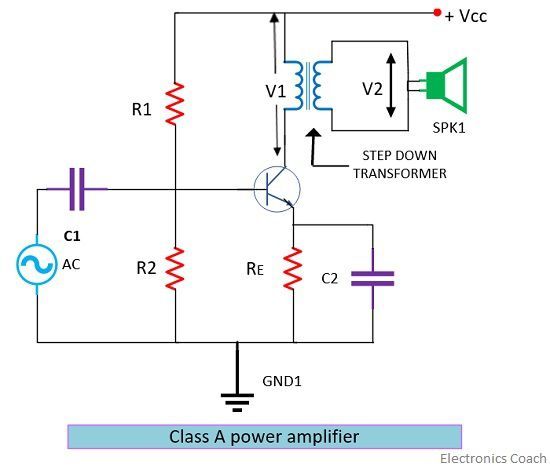 When the input voltage is applied at the base terminal of the transistor operating in CE mode it leads to variation in base current, this variation in IB produces similar variation in collector current and the output is taken across the load. 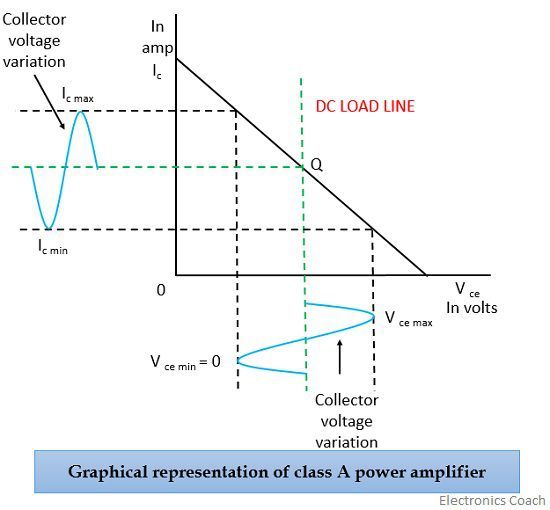 In this type, the transistor is biased in such a way that the current flows only during the positive half input cycle. In this two complementary transistors are used which receive the input signal of equal magnitude but opposite in phase.

When the input is applied at the centre tapped secondary of transformer it generates two identical signals of opposite phase and the two transistors are driven by these two input signals.

Now the operation is further discussed below: 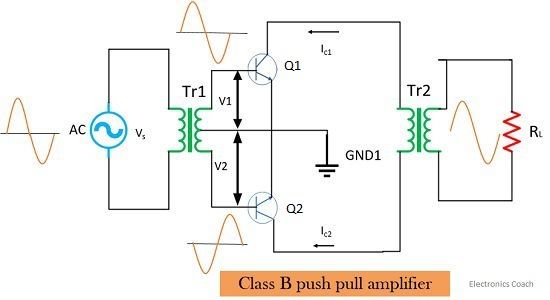 When V1 goes positive, V2 goes negative which causes Q1 to conduct and Q2 goes in OFF mode. As collector current in Q1 increases, it produces positive half of input signal.

When V1 goes negative and V2 goes positive, Q2 automatically starts conducting and Q1 goes in OFF mode. As the collector current in Q2 increases, it generates another half of the voltage signal.

This operation of the two transistors thus generates a complete sine wave at the output. 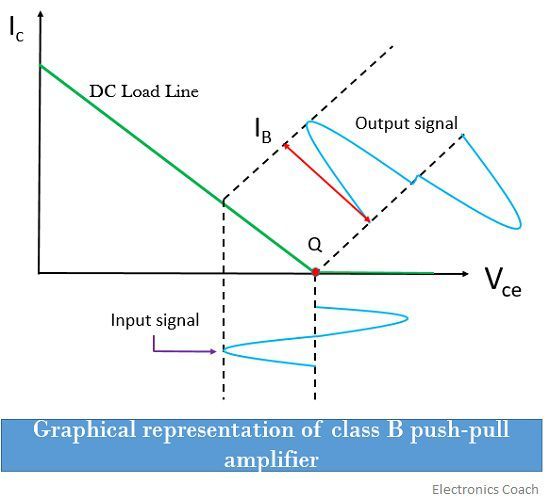 When no any input signal is present then both the transistor goes in OFF mode and no current is drawn. This prevents the unnecessary working of the transistor which decreases the chances of overheating of the device.

Working of class B leads to crossover distortion because as we know the voltage of 0.7v is required by the transistor to start its conduction so transistor will not be active below 0.7v. This means that the portion of the wave will not get reproduced at the output leading to distorted output. 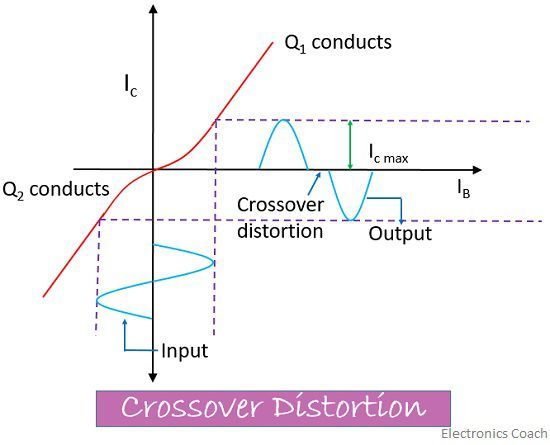 It is a combination of class A and class B type of power amplifiers. This class was basically introduced to eliminate crossover distortion that occurs in class B.

In this type, the angle of conduction lies somewhere between 180﮲ to 360﮲. Here, the transistor biasing is done in such a way that operating point Q lies near cut-off voltage. 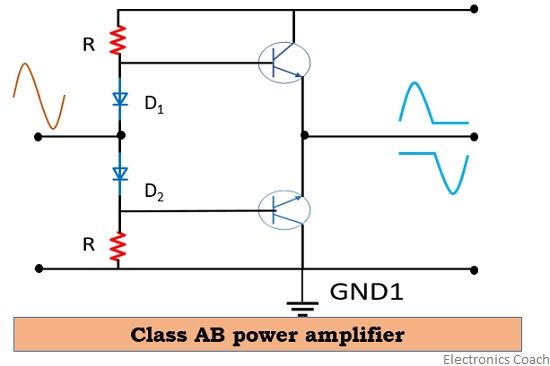 The collector current flows for more than half of input cycle that means it conducts during the positive half of the input cycle. For a small portion of the negative half cycle, as the input circuit becomes forward biased. 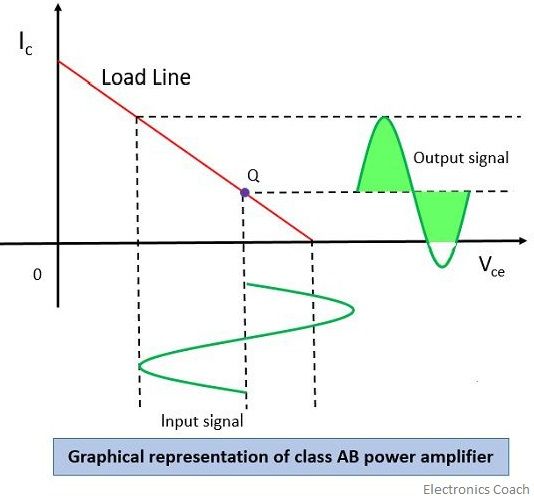 But the conduction stops for the small portion of the negative half cycle as the transistor goes reverse biased.

This class of power amplifier is designed to provide the highest efficiency of about 80%. These are biased in such a way that it operates for less than 180﮲ of the input signal but provides the full output signal in case of resonant frequency tuned circuits. 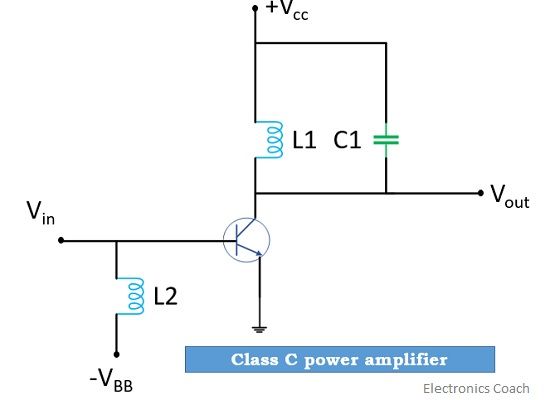 This class of amplifiers show limited use at a fixed frequency. Distortion is higher in this class so it is not suitable for an audio application. 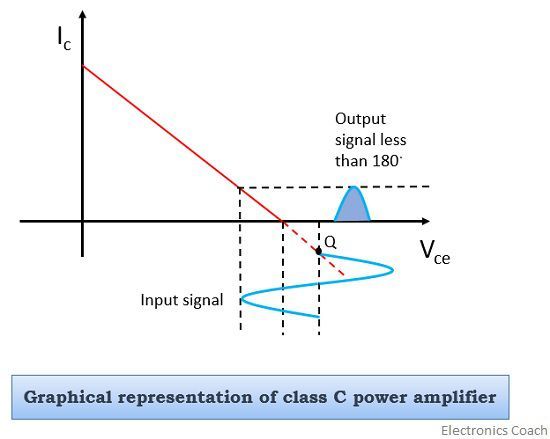 The collector current flows for less than half cycle of the input signal. The transistor remains idle and does not conduct for more than half portion of the input cycle.

It is basically used when we have to operate a digital or pulse type signal. Theoretically, it provides more than 90% efficiency as the current is drawn through ON transistor.