Definition: Electronics Engineering is the sub-branch of Electrical Engineering which deals with the motion of electrons and their behavior in vacuum, gases, and semiconductors. These particles form the basis of electronic devices such as diodes, transistors, MOSFETs, etc. and these devices are the building block of electronics circuits.

The word Electronics is formed from word Electron with Suffix “ics”. The word electron is formed by combining two words “electric” and “ion”. It is a negatively charged particle. The symbol of its representation is e-. 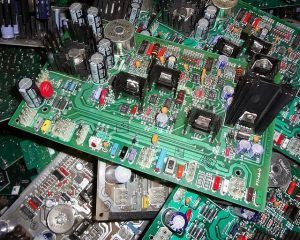 Have you ever thought what made these room size computers to become equivalent to the size of our notebook? The reason behind this was the origination of electronics. With the advent of electronics, the size of devices has reduced up to a large extent.

From Vacuum Tubes to Transistors

In 1940s vacuum tubes were used. But they were costly and large. Due to large size, it was less portable. Besides, only scientists use that for research purpose. But with electronics components such as diodes, transistors, scientists have developed integrated circuits.

With the development of integrated circuits chips, all the components such as memory and processor can be embedded on a single chip. Thus, the size of processors in present era has reduced extensively. In the mid-1940s these vacuum tubes perform memory handling tasks due to which the devices were of enormous size and lacked portability.

The revolution in the field of Electronic Engineering has occurred in the year 1946 with the invention of the transistor. It was the result of joint efforts of John Bardeen, William B. Shockley and William H. Brattain.

The other pioneers of this field were Ludwig Wilhelm Gilbert, George Simon Ohm of Germany, Hans Christian Oersted of Denmark, Andre-Marie Ampere of France, Alessandro Volta of Italy, Joseph Henry of the United States, Micahel Faraday of England. Besides, many other scientists have also contributed to this field. This was the brief introduction to the history of electronics.

Electronic Devices and Circuits: These are the cornerstone of electronics. It comprises of Diodes, types of diodes such as Zener Diode, Tunnel Diode, Varactor Diode, transistors and its type. Besides, JFETs, MOSFETs, Amplifiers, Rectifiers, etc. crucial electronic devices for several applications.  We will discuss each device and circuits in detail in coming articles.

Semiconductors are the elementary unit of Electronic devices. Thus, before starting with these topics, you should have a brief knowledge of materials such as an insulator, metals and semiconductor.