Definition: FET is an acronym used for “field effect transistor”. It is a three terminal unipolar device in which conduction is manipulated with the help of applied electric field. The name itself gives a brief idea about its working principle, “field effect”, these two words clearly indicates it is a transistor controlled by electric field.

Thus, it is also referred as a voltage controlled device in which only majority charge carriers are involved in the conduction mechanism. It comprises of three terminals, i.e. source, gate, and drain.

The circuit symbol described in the below diagram clearly illustrates the three terminals of field effect transistor. 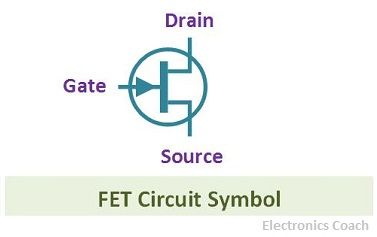 Before discussing the significance of FET, I would like to share the crucial concept regarding FET. The transistor in its name is often confused with a bipolar transistor. But there exists a vast difference between FET and BJT, i.e. bipolar transistor.

Although both are transistors and both, involve conduction of current and also both have three terminals, but the similarities end here. The BJT uses injection and collection of minority charge carriers, and this process of injection and collection is done during forward biasing of the P-N junction. On the contrary, the FETs uses an electric field to vary the depletion width during reverse biasing of the junction.

Water Analogy to understand the concept of FET

To understand how an FET works, let’s use an analogy. Analogies often make things simple to understand even a complex concept. The water source can be understood as the source of FET, the vessel which collects water is analogous to the drain terminal of FET. Let’s have a quick look at the below diagram, after that understanding the concept of FET will be a cake walk. 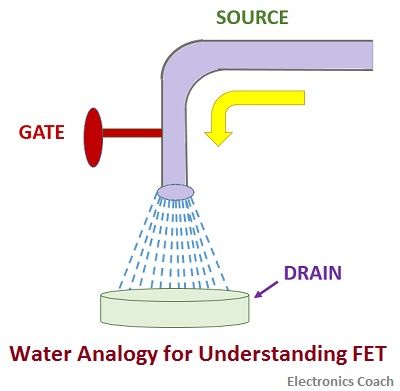 Now, can you guess what gate terminal is analogous to? If you are thinking of water tap then yes, you are correct. It is nothing other than the controlling tap which controls the flow of water. Now, the way in which the controlling tap modulate the quantity of water coming from the outlet, in the same way, the voltage at gate terminal controls the flow of current from source to drain terminal.

Construction and Working of FET 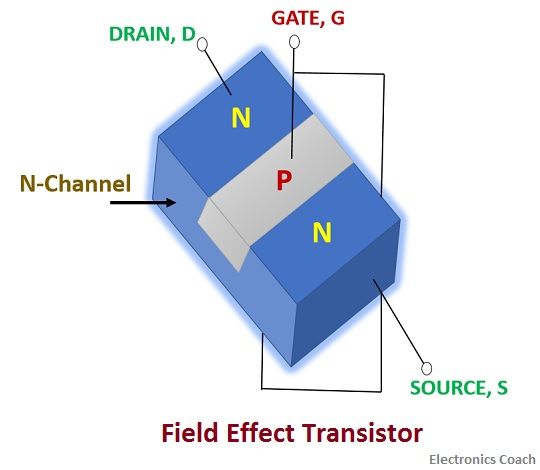 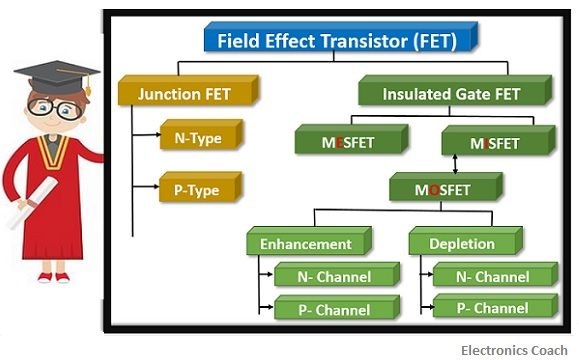 Junction Field Effect Transistor: The junction FET is nothing but the FET in which conduction is established by variation of depletion width when the junction is reversed biased. It comprises of two types according to the construction that is N-Channel and P-Channel.

MOSFET is the subtype of MISFET in which oxide layer plays a crucial role in providing insulation between the gate and other terminals. MOSFETs work in two modes that are Depletion mode and Enhancement Mode. In depletion mode, there exists a physical channel while it is not so in Enhancement mode.

The depletion and enhancement MOSFET can again be designed in two ways by using N-channel or P-channel. This was the brief description about FETs.