Definition: Op-Amp is an abbreviation for the operational amplifier is basically a three terminal voltage amplifying device. It is a high gain, negative feedback amplifier that provides stabilized voltage gain.

Op-amps are considered as the basic building blocks of the circuits in the field of analogue electronics. These are designed in such a way to be used with external feedback components such as resistors, capacitors in between input and output terminals.

As op-amps have high input impedance and low output impedance moreover has the ability to amplify signals of the frequency range from 0 Hz to 1 MHz. It can be used to amplify ac as well as dc input signals.

An op-amp act as a versatile device and can perform countless tasks when manufactured with integrated transistors, diodes, resistor and capacitor. Op-amps provides extremely high voltage gain, typically of order 200,000.

History of an Op-amp

Op-amp was firstly built with a vacuum tube but in the early 1960s, transistors replaced vacuum tubes. When IC technology arrived, it became possible to place the Op-amp into a single 8 lead package.

The figure below shows the pin diagram of an Op-amp-

Fairchild in 1965 introduced the 1st generation 709 and in 1968, still popular 2nd generation 741 Op-amps introduced. An Op-amp IC 741 has become an industry standard.

Schematic symbol of an Op-amp

V1 is the input at non-inverting terminal and

V2 is the input at inverting terminal of the Op-amp.

So, we will have a differential  value at the input

And at the output, we have an amplified output with gain

The voltage at the output will be directly proportional to the difference of two input signals.

Op-amp can be operated in a single or double ended mode that totally depends on whether the input is applied to only one of the terminals or both. The most commonly used configuration is 2 input and 1 output. 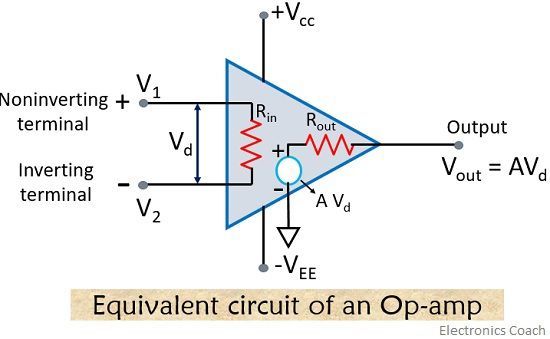 The output voltage is given by

The above equation indicates that Vout is proportional to the algebraic difference of two input voltages i.e., we can say basically the difference is amplified and not the original input.

This curve is drawn between the output voltage Vout and difference input voltage Vd where gain A is kept constant. 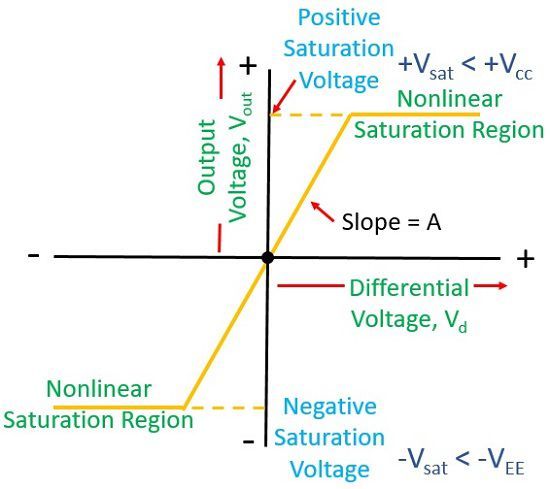 The above curve is known as the Ideal voltage transfer curve.

It is called so because while drawing the above curve we have already assumed the output offset voltage to be 0.

When we talk about normal Op-amp, the output offset voltage is nearly 0 and we ignore it for simplification purpose in the calculation. It is to be noted here that the curve is not drawn to scale; as we will have a vertical line in such case as the voltage gain is very large. In the above figure, we have seen that output voltage Vout cannot exceed positive and negative saturation voltage.

Simply put, the output voltage Vout increases in direct proportion to the differential input voltage Vd until it attains saturation value, after which it becomes constant.

The basic circuit of an Op-amp is shown below: 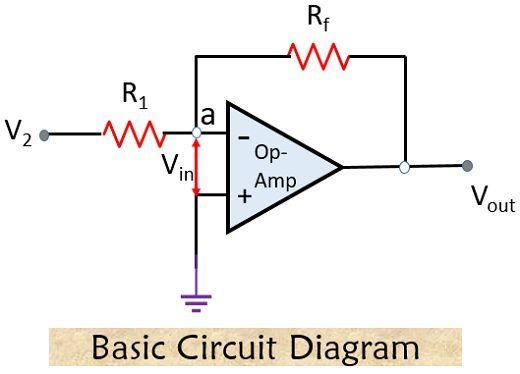 Now, let us have a look at the equivalent circuit of the basic circuit of op-amp: 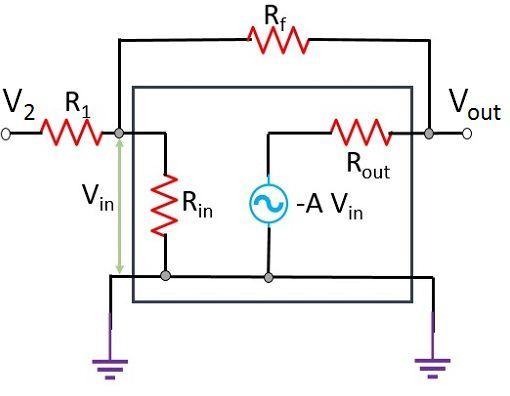 Let’s redraw the above circuit so as to have a better idea of the whole concept. 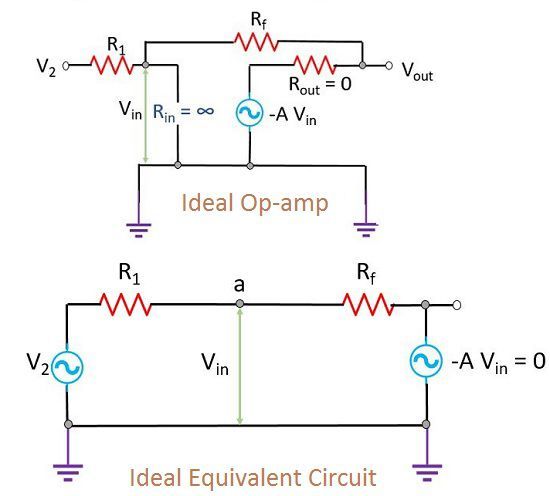 Therefore, the total input voltage we will have

The above equation shows that the ratio of overall output to input voltage depends only on the value of resistors R1 and Rf provided A is very large.

Thus we can say by using absolute resistor values of R1 and Rf, we can have a wide range of gain. The gain will be almost accurate as that of resistors used and is affected only slightly by temperature and other circuit factors.

The value of Vin as compared to the other voltages is very small and can be considered to be 0 V.

As Vin is almost 0, but not exactly 0 as Vout depends on Vin. This Vin ≈ 0 leads to the concept of virtual ground.

Virtual ground implies that though input voltage is nearly 0 there is no current through amplifier input to the ground. Let us see the figure below to have a clear concept of virtual ground.

With Vin ≈ 0, a short is considered to exist. But here the concept is virtual short, due to which no any current passes through the short to the ground. So, the current through R1 and Rf will flow.

The current equation for above circuit is given as-

Although the above figure is not physically correct, it allows an easy means for determining the overall voltage gain.

The overall idea of virtual ground comes into focus when Vin ≈ 0.

Now the question arises, How Vin can be approximately 0?

On application of V2, point ‘a’ gains some positive potential but at the same time as Vout comes into existence. Due to this, some part of Vout is fed back to point ‘a’ in phase opposition of already existing voltage V2 because of negative feedback. Thus causing algebraic sum to be almost 0.

For an Op-amp differential and common mode, signals are very popular terms.

Differential input signals as the name suggests is the value obtained due to the difference in two input signals.

Characteristics of an Op-amp

While designing Op-amp circuits or in troubleshooting both ac and dc characteristics are to be considered as Op-amp is a dc amplifier.

These non-ideal characteristics are discussed below:

Difference amplifier has excellent ability to cancel out or reject certain types of unnecessary voltage signals. Noise can be that undesired signal. These noise signals are not meant to be amplified in the amplifier.

As noise signals appear equally at both inputs of the circuit. It means that undesired signal appearing at both the inputs will be rejected by the differential amplifier. A measure of rejection of the signal that is common to both the input is known as common mode rejection.

In industrial circuits, Op-amps are used strictly as dc amplifiers but they have ac applications also.

Op-amp finds its application in a wide variety of fields. These are used in the construction of active filters that can provide the high pass, low pass, bandpass or band-reject functioning.

They can be used as comparators or in the construction of oscillators.