Sometimes during amplification of the signal, it is necessary to select the desired frequency range and reject others. Thus tuned amplifiers are employed in radio receivers. 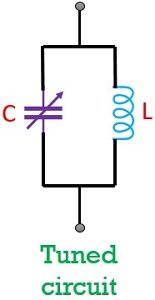 It is noteworthy here that tuned amplifiers provide high gain. This is so because employing a resonant circuit as load offers high impedance and gain of the transistor amplifier is a quantity dependent on load impedance.

The resonance frequency of a tuned circuit is given as

The frequency response curve for a tuned amplifier is similar to that of the resonance curve of a tuned circuit. 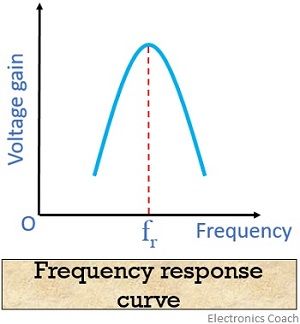 Let’s have a look at the basic circuit of a tuned amplifier: 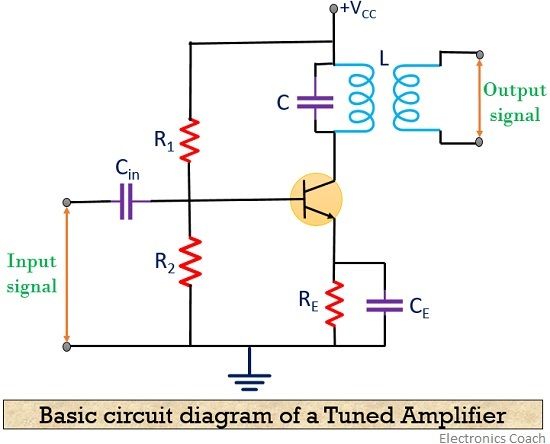 What are the resonance circuits?

The quality factor is given as the ratio of coil impedance(reactance) of an inductor to its resistance. As an inductor along with inductance possesses a small amount of resistance. Thus, for a better Q factor, it is needed that the resistance must be low.

It basically measures the purity of an inductor and is a unitless quantity.

To sum up, basically, Q factor is the measure of energy storing efficiency of an inductor.

It is given by

The resonance curve will show the sharper response for a higher value of Q. Thus, providing better selectivity.

The resonant circuit in a tuned amplifier contains coil. This coil is not purely inductive practically, due to losses associated with it. These losses are represented in the form of resistance.

Copper, eddy current and hysteresis losses constitute the total loss of a coil. Total loss in a coil is expressed by the series combination of inductor along with leakage resistance.

The bandwidth of a tuned amplifier is defined as that frequency range where the gain of the amplifier reduces to 70.7% of its highest value.

Let’s have a relationship between Q factor and bandwidth of a tuned amplifier.

The Q factor is given by

: the frequency of resonance is given by

The tuned amplifier is majorly classified into two categories: 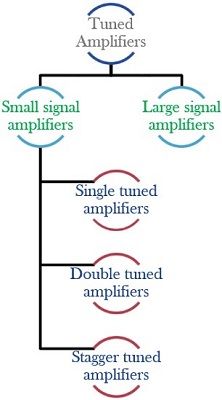 Small signal tuned amplifiers are used to amplify signals of small magnitude at radio frequency. As the power needed for its operation is small, thus operated under class A operation.

Large signal tuned amplifiers are used for amplification purpose but for the radio frequency signal having a large magnitude. As it requires large power for operation, thus operated under class B or C operation.

Further, we can classify the small signal tuned amplifier in the following categories:

Each of the tuned circuits, in all the stage, is at the similar frequency. However, single stage tuned amplifier has a drawback known as potential instability.

In this type of tuned circuit, every stage consists of 2 mutually coupled tuned circuit. Both the circuit here is tuned to the similar frequency.

The double tuned circuit was basically introduced to overcome potential instability present in the single tuned amplifier. It consists of 2 inductively coupled tuned circuits. As the coupling of the 2 tuned circuit is changed, the shape of the frequency curve will also change.

Stagger tuning is a technique by which, the cascaded stages are tuned to some different frequency. This provides an increase in bandwidth along with more desirable characteristics.

Tuned amplifiers are used in high or radio frequency applications such as in TV and radio circuits.