The RC network is present in the feedback path is connected in ladder fashion thus also known as ladder RC phase shift oscillator. We know for an RC circuit; the output voltage leads the input for a sinusoidal waveform.

However, the phase angle by which the output leads the input relies on the values of R and C component.

We know to have sustained oscillations,

Also, loop gain equal to 1 can be achieved by tuning the gain of the amplifier and feedback circuit.

Let us first understand how the phase shift is being generated by the oscillator.

The figure below represents an RC phase shift feedback network, having a resistor and capacitor:

As we have already discussed that output leads the input in this case, thus, is also known as a phase lead circuit.

From the above circuit, we can say that the transfer function of the circuit is given as 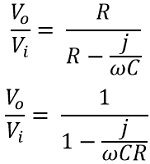 So, the phase shift will be given as 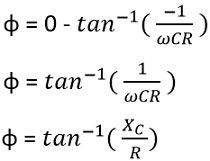 Thus by observing the above expression, we can clearly say that the phase shift depends on the value of R and C.

So, for a very small value of XC, φ will be equal to 0⁰. But when R is very small or 0 then it will cause XC/R to get equal to infinity, thus in this case φ will be 90⁰.

Hence from the above discussion, it is clear that the feedback circuit provides a phase shift between 0 to 90⁰.

But as we have already discussed that we require to have a feedback network that can provide us with a phase shift of 180⁰ in the phase shift oscillator. Thus the value of R in the circuit must be kept as low as possible, more specifically 0.

Suppose we have formed cascade connection of two RC stages, where each stage is providing a phase shift of 90⁰. Thus combinely we can have a phase shift of 180⁰. But in that case, if the value of R is 0, then the gain of the circuit will also be 0.

The figure below represents the feedback network having 3 RC stages:

It is to be noted here that the values of resistance and capacitance must be the same for each stage. So that each section of the feedback circuit produces a desired phase shift for a particular frequency.

The figure given below shows the circuit of an RC phase shift oscillator: 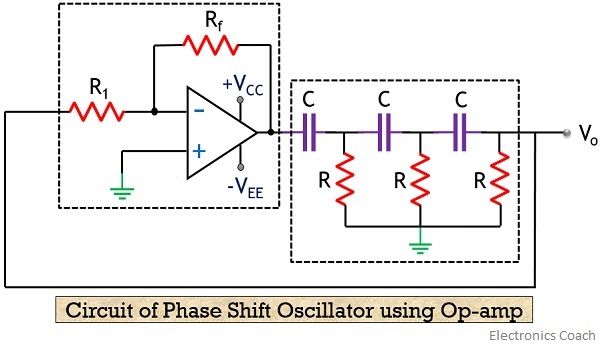 As we can see that the output of the inverting amplifier is applied to the feedback network. This signal which is fed back to the amplifier drives it further. Thus we achieve the total phase shift of 360⁰ around the loop. Hence the condition for positive feedback is achieved thereby causing the circuit to act as an oscillator.

The expression for the frequency of oscillations is given as

: N is the total number of stages

Thus for 3 stages, the frequency of oscillations will be

Let us now move further and derive the expression for attenuation provided by the RC phase shift network.

Here, Va and Vb are the voltage at the two nodes, while I0, I1 and I2 denote the current that is flowing through the 3 capacitors.

The overall voltage will be equal to the sum of output voltage Vo and drop across the capacitor. Thus we have 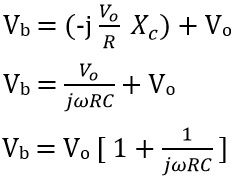 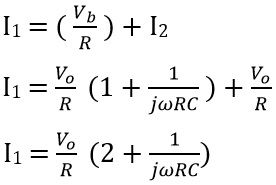 On solving we get

On equating the imaginary part, we get

Therefore, on transposing and further solving we will get

And on equating the real part we get 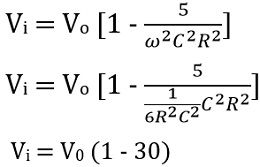 Thus we can say that the network is providing attenuation -1/29. Here, the negative sign indicates that there exists a phase shift of 180⁰. Usually, in RC phase shift oscillator, the value of R is kept constant and only C is kept variable, so as to have the desired frequency of oscillation.

This is all about RC phase shift oscillator.