Definition: Shockley diode is a four layer (P-N-P-N) device. It conducts when it is forward biased and stops conducting when it is reverse biased. The major difference between conventional diode and Shockley diode is, it starts conducting when the forward voltage exceeds break-over voltage.  It was invented by William Bradford Shockley, and that’s why it is named after its inventor.

Shockley Diode is not widely available commercially. Still, it forms the backbone of devices like Diac, Triac, SCR. It operates in two states either ON or OFF. Thus, it is used as switching device. It is also called PNPN diode because of its construction architecture. It is a two terminal device that’s why it is categorised as diodes.

It is formed by sandwiching four layers of semiconductors P-type, N-type, P-type and one more N-type. Three junctions are formed due to the merging of four layers together. Its construction and circuit symbol are described in the below diagram. 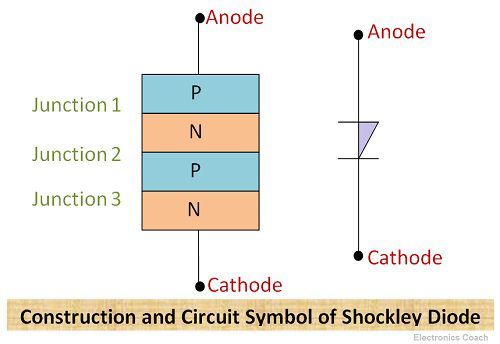 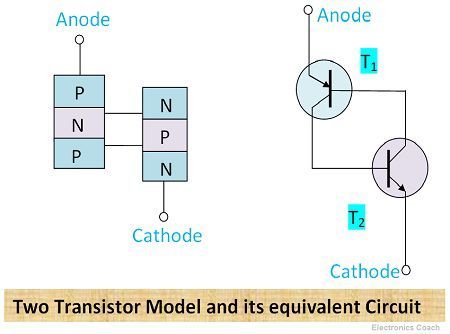 But when it is operated in reverse biased and the voltage exceeds the breakdown voltage the diode gets damage.

When the anode of junction J1 and J3 is made positive and cathode as negative, the current starts increasing gradually. But before attaining break-over voltage, the resistance offered by the diode is quite high. Thus, only small amount of leakage current flows through the diode.

When the forward voltage exceeds break-over voltage VBo, the current starts increasing significantly. When the current increases from a particular limit the diode switches to ON state. This value of current is called holding current in Shockley diode.

To switch the diode in OFF state the voltage supplied should be decreased so that the value of current decreases below holding current limit.

As discussed above when the Junction J1 and J3 are forward biased, the current in the diode starts increasing. Thus, it can be seen from the Characteristics curve that above break-over voltage current is increasing significantly. And when current attains a value equal to holding current value (IH) the Shockley diode is in ON state.

Its construction is complex due to the involvement of four layers of semiconductor material. 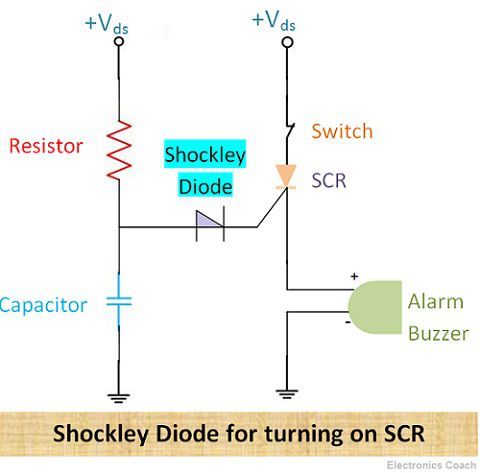 Thus, SCR is turned on, and the alarm starts. When the voltage supply is ceased then also the SCR remains in the latch that is in conducting stage for some time. Thus, the Shockley diode is only used for turning it On. 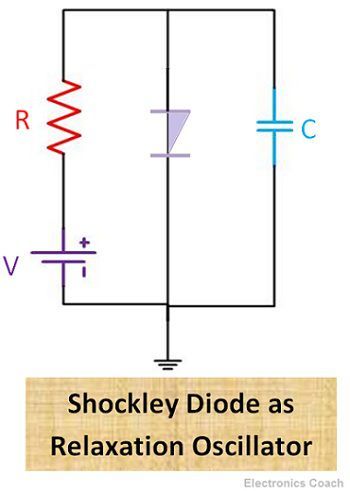 And then the capacitor discharges through the Shockley diode, and thus the cycle repeats itself. 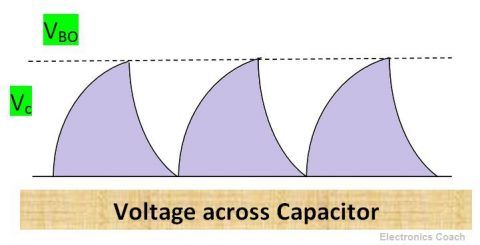 But the capacitor does not discharge completely. The waveforms of relaxation oscillator can be understood with the help of the diagrams.