A graphical method of representing the control system using the linear algebraic equations is known as the signal flow graph. It is abbreviated as SFG. This graph basically signifies how the signal flows in a system.

The equation representing the system holds multiple variables that perform a crucial role in forming the graph.

Basically, if we have the set of equations that describes the system then by using the variables of the equation, the signal flow graph is obtained. This graph helps to get the interrelation existing between various variables of the system.

In the previous article, we have discussed block diagram reduction of the control system that helps to simplify a complex system thereby analyzing the system by determining its transfer function.

Thus, another method was proposed by S J Mason which is known as a signal flow graph. This method helps to relate the input and output variables of the system in a graphical manner.

It is noteworthy that by directly referring to the block diagram of a control system, the signal flow graph can be constructed.

The common terms used in a signal flow graph are as follows:

1. Node: The small points or circles in the signal flow graph are called nodes and these are used to show the variables of the system. Each node corresponds to an individual variable. In the figure given below x1 to x8 are nodes.

3. Output node or sink: A node that only contains branches with entering signal is known as a sink or output node. Both input and output nodes act as dependent variables. Here, x8 is the sink.

4. Mixed node: It is also known as chain node and consists of branches having both entering as well as leaving signals. For this SFG, x2 to x7 are mixed nodes.

5. Branch: The lines in the SFG that join one node to the other is known as a branch. It shows the relationship existing between various nodes.

6. Transmittance: The transfer function or gain between two nodes is said to be the transmittance of the SFG. Its value can be either real or complex. These are from ‘a’ to ‘j’ here.

7. Forward path: A path proceeding from input to output is known as forward path. Here one of the paths is x6 – x7 – x8.

8. Feedback loop: A loop which is formed through a path starting from a specific node and ending on the same node after travelling to at least one node of the graph is known as a feedback loop. It is to be noted that in the feedback loop, no node should be traced twice. Here the loop is x2 to x6 then back to x2.

9. Self-loop: A self-loop is the one which has only a single node. The paths in such loops are never defined by a forward path or feedback loop as these never trace any other node of the graph. Here it is formed at node x5 having gain f.

10. Path gain: When the signal flows in a forward path then the product of gains of each branch gives the overall path gain. For above-given graph, i*j is path gain for forward path, x6 to x8.

11. Loop gain: The product of individual gains of the branches that are in the form of loop is said to be the overall loop gain. For the loop forming between x3 and x4 the gain is c*d.

There are two ways by which a signal flow graph can be constructed. One way to form an SFG is by using systems equation. While the other way of constructing SFG is by using the block diagram. So, let us see each method one by one.

The steps are as follows:

Let us understand this using an example. The system equations are as follows:

So, here Vi and Vo are the input and output variables respectively. While V1, V2 and V3 are the system variables.

Hence first, all the variables will be represented as nodes and further interconnection between the nodes using branches will be done. 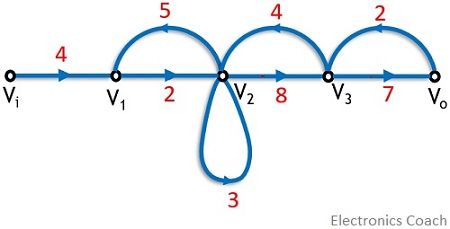 The branch gain is nothing but the coefficients of the variables. And the input and output variables complete the signal flow graph.

The following are the steps to draw a signal flow graph:

Consider an example. The figure below shows a block diagram which is to be converted into the signal flow graph.

First, represent each and every take-off and summing point of the above-given block diagram as a separate node. Then replace the blocks of the above figure by branches in the signal flow graph.

The branch gain corresponds to the transfer function of each block.

In this way using the block diagram of the system equation, a system can be represented in the form of a graph, known as a signal flow graph.