Definition: Single sideband modulation (SSB) is an amplitude modulation scheme in which only a single sideband is transmitted through the channel. It is also known as SSB-SC which is an acronym for Single Sideband Suppressed Carrier as it allows suppression of one sideband and carrier completely.

Why is the suppression of a sideband allowed in SSB modulation?

Single sideband modulation technique was adopted, as by suppression of one of the two sidebands along with the carrier causes no loss of information. 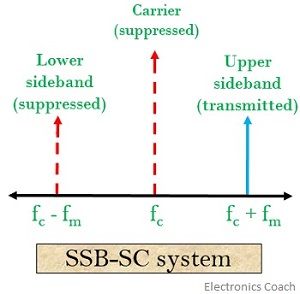 Hence, the bandwidth requirement also gets reduced to half and there are chances for an accommodation of twice number of channels using the SSB modulation technique.

Let the modulating signal be,

As we have discussed the similar expression in DSB-SC modulation. So, here we can write,

It is a combination of 2 sidebands,

Let us now discuss the two in detail:

First, have a look at the block diagram of Filter method for suppression of one sideband.

As the DSB output contains the two sidebands, and only carrier component is suppressed, so sideband suppression filter is needed further in order to eliminate one of the 2 sidebands.

The filter characteristics should be such that, it must have flat passband and should possess high attenuation beyond the passband. So, to have such a response, the tuned circuit must have a very high Q factor.

To have such a high Q factor it is needed that the difference between modulating frequency and carrier frequency to be high. There is no any practical way to achieve such a high value.

Then the SSB signal is fed to a linear amplifier for further amplification. The process of frequency boosting is sometimes also termed as Up-conversion.

Basically to eliminate unwanted sideband- LC, ceramic, crystal or mechanical filter are used. Though ceramic or crystal filters are low in cost but provides better results at operating frequency above 1 MHz. Among all these mechanical filters possess the best characteristics thus is widely used.

The figure below shows the block diagram of the phase shift method used for the generation of the SSB signal. 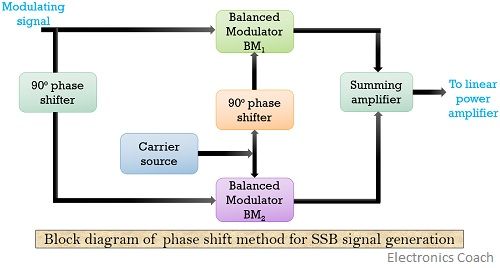 The carrier signal generated by the carrier source is fed to the balanced modulator 1 or BM1 after it is phase shifted by 90⁰. Also, the modulating or baseband signal is applied to the BM1.

Moreover, the carrier is directly fed to the Balanced modulator 2 or BM2, along with this a 90⁰ phase shifted modulating signal is also applied to the same. Thus, at the output of the two balanced modulators, signals consisting of 2 sidebands are achieved. BM1 generates USB and LSB but both with a phase shift of +90⁰.

Hence at the output of summing amplifier, we only have USB of SSB signal.

Quartz crystals are mostly used in the manufacturing of filters that are employed in the SSB modulation system.