Definition: Vestigial Sideband (VSB) modulation is a modulation technique which allows transmission of one sideband in addition with a part or vestige of the other. It is basically a compromise between DSB-SC and SSB modulation.

VSB technique was introduced to overcome the drawbacks of SSB modulation. As SSB modulation requires accurate frequency response of the filter to transmit only one sideband completely.

Thus by using VSB modulation one can simplify the design of the filter to a great extent. Also, the SSB modulation does not allow transmission of extremely low-frequency signal accurately. Hence VSB technique is used.

Let’s now have a look at the figure shown below for the generation and transmission of Vestigial sideband signal:

Here, from the above figure, it is clear that a VSB signal is generated at the output of the sideband filter employed in the circuit. However, further amplification of the signal is needed in order to transmit it to longer distances.

The balanced modulator used here produces the DSB-SC signal which is fed to the sideband filter. The filter is designed such that it transmits one sideband including vestige (some part) of the other. 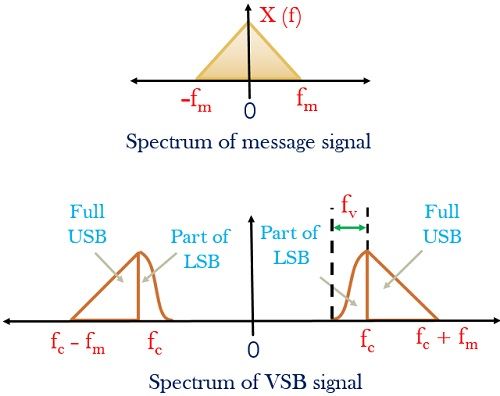 It is already clear that in vestigial sideband modulation some eliminated portion of USB is compensated by the vestige of LSB.

The bandwidth of the Vestigial sideband signal is given by

We are already aware of the fact that an amplitude modulated signal consists of two sidebands along with a carrier.

However, systems utilizing suppression of the signal eliminates sometimes carrier only and sometimes one sideband along with the carrier. Due to this, there exist some comparison points between them.

Since a bandwidth of video signal is 4.2 MHz and we have already discussed in DSB-SC modulation that it requires bandwidth twice that of the message signal. Hence in case of DSB system, the required bandwidth will become 8.4 MHz i.e., twice the bandwidth of the video signal.

Furthermore, by inserting guard band between audio and video carriers then it leads to some more increase in channel bandwidth and causes it to reach up to 9MHz.

Such a large bandwidth must be reduced and so VSB technique is adopted.

Here, we can see the spectrum of transmission of TV signal using VSB technique in the figure shown below 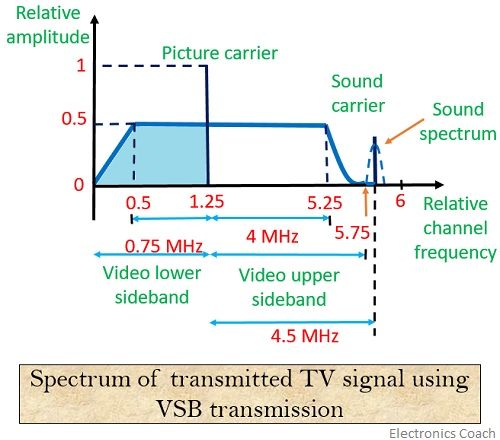 VSB technique allows the transmission of the upper sideband along with the vestige of lower sideband. However, suppresses the remaining part.

From 1.25 MHz of lower sideband band, 0.75 MHz vestige is transmitted and rest is suppressed. This basically simplifies the filtering requirements.

Hence, by this, we can reduce the bandwidth requirement to 6 MHz from 9MHz.