This saved power can be inserted into the 2 sidebands. Hence, ensuring a stronger signal that transmits over long distances. As during suppression, the baseband signal does not get affected in any way.

A normal system also termed as Double Sideband Full Carrier (DSB-FC) system, transmits carrier along with the two sidebands. Hence, resulting in a considerable power loss. So, DSB-SC system is used in order to overcome the drawback of DSB-FC system.

Let’s have a look at the block diagram of the DSB-SC system shown below:

Here, by observing the above figure, we can say that a product modulator generates a DSB-SC signal.

From the above equation, it is clear that only 2 components are present in the spectrum. These two are the two sidebands that are placed at +ωc and -ωc. 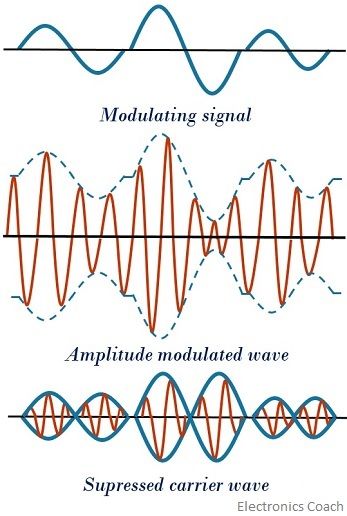 In order to get an exact an idea about the suppression of carrier in DSB-SC system.

Consider the baseband or modulating signal,

and the carrier signal,

The maximum frequency is fc + fx

The minimum frequency is fc – fx

Bandwidth is given as

Thus, at the output, the DSB-SC wave contains a signal whose frequency is twice the frequency of the baseband signal.

The carrier without any information content is suppressed by a balanced modulator. Its principle of operation is such that, when two signals of the different frequency are passed through a non-linear resistance then an amplitude modulated signal with the suppressed carrier is achieved at the output.

It can be a diode, JFET or BJT that possess non-linear resistance characteristic.

Let’s have a look at the circuit of the balanced modulator using diodes: 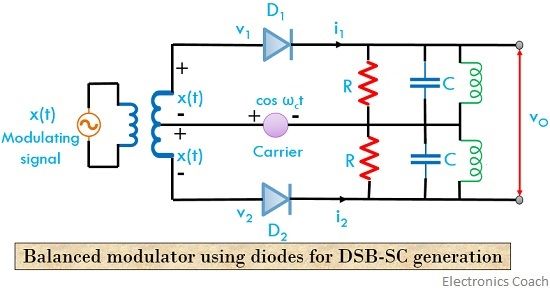 As we can see that the baseband input signal is applied at the input of 2 diodes that are 180⁰ phase reversed with each other through a centre tapped transformer.

Hence the input at D1,

At the output side tuned bandpass filter is obtained by parallel connection of RLC circuit.

So, the current through D1 is given as

the output voltage is given by

On substituting the above-given value of i1 and i2 in the output equation, we will have,

Therefore, the output is,

Thus we will have,

DSB-SC technique allows us to have a transmission that reduces overall power consumption rate, thereby ensuring a stronger signal at the output.