On the contrary, the resistance of the varistors varies with the application of voltage. A question emerges in this context why to use variable resistor or varistor? What is its significance? The varistors are significant in the application where the excessive current in the circuit may lead to the destruction of entire circuitry.

The crystals of semiconductor material such as silicon carbide are used with the ceramic binder, and both are pressed between electrodes, and the entire crystal is sintered at a higher temperature. The temperature of manufacturing and sintered temperature plays a vital role in shaping electrical characteristics of varistors.

Thus, when the device is switched from forward bias mode to reverse bias mode the charge stored at the junction takes some time to drain out completely. Thus, the current flows for a short duration even in reverse biasing mode. 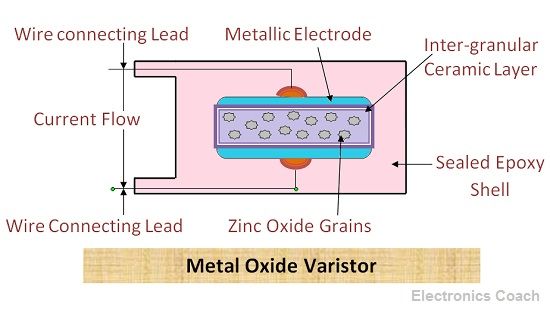 In metal oxides varistors the small metal oxide grains act as a group of a large number of diodes. Thus, it can be considered as a large number of small diodes are connected in parallel. Due to this the junction formed by tiny diodes is small and when the voltage is applied the small amount of voltage appears across each diode.

Thus, due to less voltage which appears across the junction formed by metal oxide grains,  the reverse leakage current generated is also minimal.

When forward biasing is applied, the varistor offers high resistance in the path of current, and thus, very low amount of current passed through the devices. The voltage at this point is called rated voltage of varistor.

When the applied voltage increases further and becomes higher than the rated voltage of the varistor, the resistance of the device starts falling drastically and the currents start passing through the varistor.

It is evident from the diagram below that the resistance starts falling with the increase of voltage. 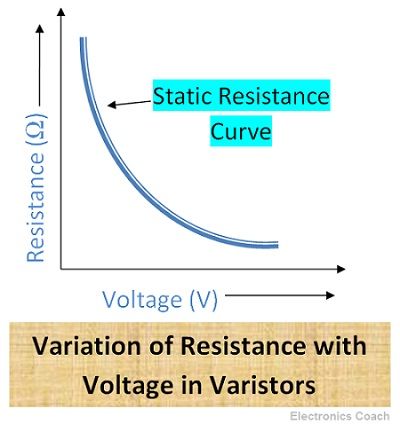 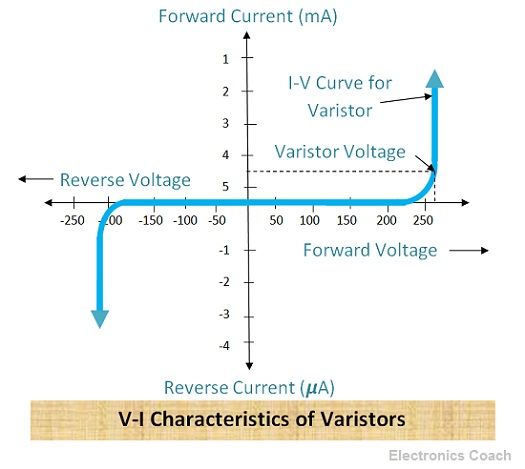 Protection of Electrical and Electronics Circuit: Varistors protect electrical and electronics circuit by allowing excessive current to pass through them. Varistors are connected parallel to the electrical or electronic component in the circuit. When the voltage appears across the circuit, the varistors acts as a short circuit and offers negligible resistance.

In electronics circuit also the varistors are connected across the transistors in parallel so that in the case of excessive voltage or current appears in the device the entire current flows through varistors.

where C and β are constants

Relationship between leakage current and frequency

where F is the frequency, C is the capacitance and Xc are the reactance.

Thus, if the frequency of the signal increases then reactance decreases and thus the leakage current through the devices starts increasing.