Definition: Voltage regulator is a device that maintains a constant dc output voltage irrespective of the changes in input voltage or load conditions. The ac ripple voltage that is not removed by the filters is also rejected by the voltage regulators.

The combinations of elements present in the design of voltage regulator ensure to have a constant output voltage with a variable input supply.

Whenever there is a need to have a steady and reliable output voltage then voltage regulators are the most preferred circuits.

Voltage regulators also display protective functions such as overvoltage protection, short circuit protection, thermal shutdown, current limiting etc. It can be a linear regulator or switching regulator, but the easiest and affordable type of voltage regulator is the linear one.

A Zener diode is used as a voltage regulator that provides a constant voltage from a source whose voltage varies substantially.

As we can see in the figure shown above, a resistor is placed at the beginning of the circuit. In order to limit the reverse current through the diode to a safer value resistor, Rs is employed in the circuit.

The source voltage Vs and resistor Rs are so selected that the diode operates in the breakdown region. The voltage across RL is known as Zener voltage Vz and diode current is known as Iz.

A steady state voltage is maintained across the load RL, as the output voltage fluctuations get absorbed by the resistor Rs. The input voltage whose changes are to be regulated connects the Zener diode in reverse condition.

The diode does not conduct unless the voltage across RL is less than Zener diode breakdown voltage Vz, and Rs and RL constitute a potential divider across Vs.

As the supply voltage Vs is increased, in this case, the voltage drop across RL will be more as compared to the Zener diode breakdown voltage. Thus, causing Zener diode to conduct in its breakdown region.

Current through RS is given by-

Source current gets split into Iz and IL at the junction-

The voltage across Zener diode Vz remains constant until it is operating in breakdown region through the Zener current ID may vary considerably.

As a result, the voltage drop across Rs will be more thus the voltage at the output will be a value that is close to the input or supply voltage.

Hence we can say, the Zener diode maintains a uniform voltage across the load unless the supply voltage is more than Zener voltage. 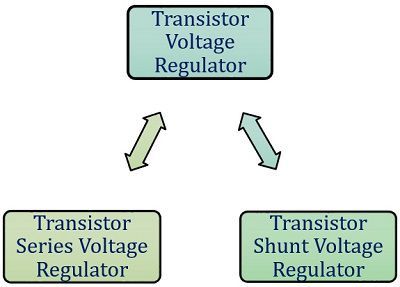 By the use of any of the above-mentioned types, we can have a constant dc output voltage of a predetermined value. This value is independent of the variation in supply voltage or load at the output.

Here, the magnitude of input that gets output voltage is controlled by the series control elements. The circuit that samples output voltage provides feedback that is compared with the reference voltage.

In the above circuit, the collector and emitter terminals of the transistor are in series with the load that’s why it is called series regulator. The transistor Q is known as the series pass transistor.

When dc supply is given to the input terminal it causes the regulated output voltage to appear across the load resistor RL. The transistor employed in the circuit serves as variable resistance and Zener diode supplies the reference voltage.

Its operation is based on the principle that a large variation in input appears across the transistor thus output voltage tends to be constant.

The base voltage remains almost constant whose value is somewhat equal to the voltage across the Zener diode Vz.

Moving further and let us consider the case where the output voltage is increased due to increase in the supply voltage. This increase in Vout will resultantly decrease VBE as Vz is fixed at a certain level.

This reduction in VBE will automatically reduce the conduction. Due to this, collector-emitter resistance RCE increases, thus causing VCE to increase, ultimately output voltage gets reduced.

Now, what about the effect of the change in load at the output voltage.

Suppose the value of load resistor RL decreases thus causing the current through it to increase. In such a condition, Vout starts decreasing due to which VBE increases. Ultimately, the conduction level of transistor increases that decreases the RCE.

This decrease in the resistance increases the current slightly that compensates for the reduction in RL.

Thus the output voltage remains constant as it is equal to ILRL.

The block diagram of shunt voltage regulator is shown below- 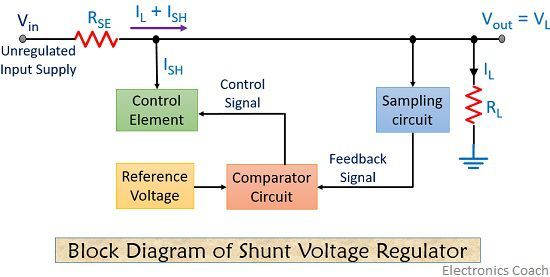 Suppose there is a change in load, thus causing the output voltage to change. So, a feedback signal is sent to the comparator circuit that provides the control signal to vary the magnitude of current shunted away from the load. 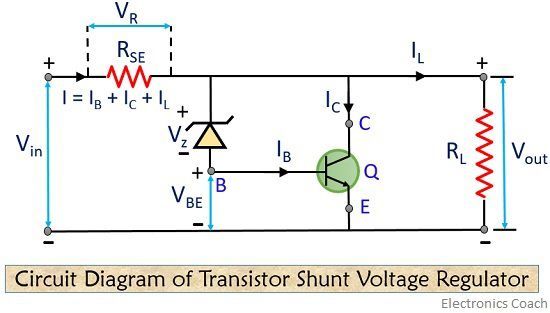 Here, RSE is connected in series with supply and the transistor is connected across the output. The supply voltage reduces due to drop across RSE, this reduction in voltage depends on the current supplies to RL.

These are used in computer power supplies where they regulate dc voltage. In power distribution system, voltage regulators are used along distribution lines so as to provide the constant voltage to the consumers.