Definition: Zener diode is specially designed for operation in the breakdown region in reverse bias condition. It is also called breakdown diode. In order to achieve sharp breakdown voltage, it is properly doped. American Scientist C. Zener explained the phenomenon of the breakdown.

In the previous article, we have discussed diodes. Diodes can be classified into different types by its operational mechanism. Thus, they are designed in various ways for specific applications.

Different diodes used as switching elements are the zener diode, tunnel diode, Varactor diode, Schottky diode, power diodes, etc. We will discuss Zener diode and its applications in this article.

In passivated structure of a Zener diode, the edges of the junction are covered by the layer of oxides of Silica. 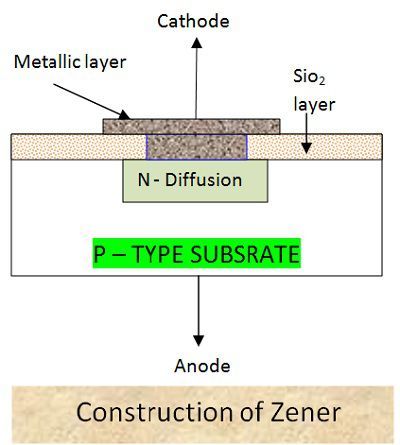 A Zener diode is similar to conventional PN Junction diode except that it is properly doped to achieve sharp breakdown voltage. There are two types of mechanism by which breakdown can occur at reverse PN junction that are avalanche and Zener breakdown.

Thus, current increases suddenly due to the movement of minority charge carriers and sometimes it leads to the breakdown of the junction. This is called of Zener breakdown. This is observed in diodes having a reverse voltage of less than 5 volts.

Thus, these free electrons, in turn, collide with other atoms to liberate more electrons. In this way, the current becomes very large that it leads to the breakdown of the diode. Avalanche breakdown occurs when the reverse voltage becomes higher than 5V.

A Zener diode can use any of these two breakdown mechanisms. Although there are two types of breakdown mechanism, still only name Zener is preferred. Silicon and Germanium both can be used for the construction of Zener diode, but Silicon is often used because of it can operate at higher temperature, and current capability of silicon is high.

We have already discussed earlier that when the reverse voltage increases at a particular point, the junction breakdowns due to large reverse current. The voltage at which current starts increasing rapidly and the stage of breakdown is reached it is called Zener Voltage. The current which increases rapidly is called Zener Current. 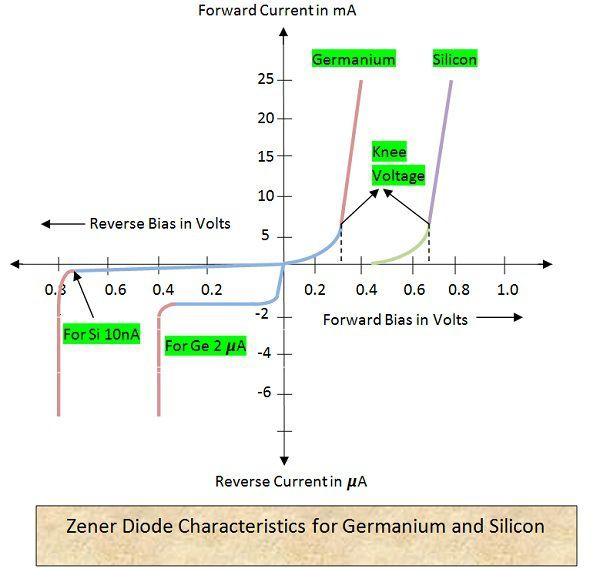 The diagram represents the Volt-Ampere Characteristics of Silicon and Germanium diodes. It is operated in breakdown region, and the current is limited by dynamic resistance called zener impedance. The magnitude of zener voltage is dependent on the amount of doping.

The forward Characteristics of Zener diode is similar to that of ordinary PN Junction Diode. But the reverse characteristics are slightly different. During the operation in breakdown region, it does not burn out immediately. As long as the current through the diode is limited by the external circuit within permissible values, it does not burn out.

Zener impedance: It is the dynamic resistance of a zener diode. It is represented by rz .

1. Zener Diode as Voltage Regulator: Voltage regulator is a device which maintains constant output voltage without bothering about variation in input voltage and load current. Zener diode is used as the voltage regulator. 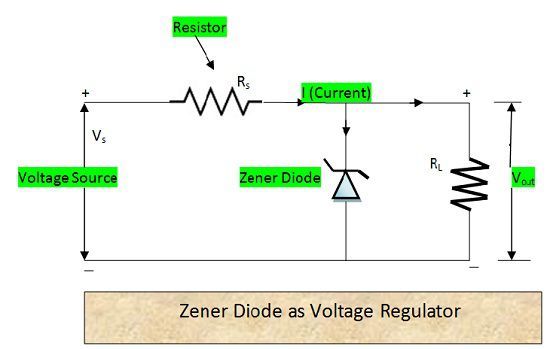 The supply voltage Vs and the resistance Rs are so designed that the diode operates in breakdown region. Besides, Resistor Rs is used to limit the value of reverse current through the diode. The diode voltage Vz which is same as the voltage across the load RL  is the zener voltage Vz.

3. As Clipper: Zener diode is used in wave shaping circuit as a clipper. It is used to clip input waveform in specific applications.

5. Meter protection: Zener diode is used in electronics circuit for the protection of multimeter. In some cases, excess current flows through a circuit and damage the multimeter. Thus, Zener diodes protect it from damage by providing voltage regulation.