Definition: Bode Plot is a graphical method used for design and analysis purpose of the control system. In the Bode Plot, a logarithmic scale is used that helps in simplifying the way to graphically represent the frequency response of the system.

The idea of logarithmic scaling was provided by Hendrick W. Bode.

Thus, H.W. Bode proposed a different but powerful and helpful method for the purpose of stability analysis of the control system.

What is a Bode Plot?

Also, all the 3 parameters on both the plots are sketched for the logarithmic scale.

So, more simply, we can say that a Bode Plot consists of 2 plots:

For the transfer function G(jω)H(jω), in order to express the magnitude in logarithmic values, we need to find,

And this magnitude in dB is plotted for log10 ω. This is represented in the general representation figure given below: 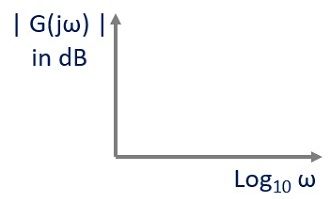 2. Phase Angle Plot: Here, the phase angle in degrees is sketched against logarithmic values of frequency.

Here, the angular value of G(jω) in degrees is sketched against log10 ω. The figure here represents the general representation of phase angle plot: 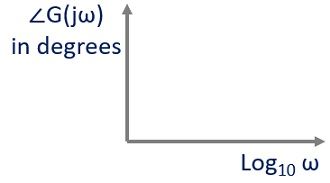 Bode Plot is also known as the logarithmic plot as it is sketched on the logarithmic scale and represents a wide range of variation in magnitude and phase angle with respect to frequency, separately. Thus, the bode plots are sketched on semi-log graph paper.

Also, as we can see that in both the plots the logarithmic value of frequency is scaled on the x-axis, so, x-axis can be kept common and both magnitude and phase angle plots can be drawn on the same log paper.

It is to be noted here that, suppose, we are having open-loop transfer function of the system G(jω)H(jω) and we have to determine the closed-loop stability by making use of frequency response of the open-loop system. Then, not simply G(jω) but magnitude and phase angle of G(jω)H(jω) is to be plotted against log10 ω.

For the open-loop transfer function G(jω)H(jω), for each associated factors, the procedure of sketching the bode plot is given as:

So, the magnitude in dB will be expressed as:

In the above-given magnitude equation, due to the presence of constant K, the magnitude will always be constant for each value of ω between 0 to ∞. Thus, in the magnitude plot, this is indicated by a straight line parallel to the x-axis.

This means in case of magnitude; the effect of K does not show variation. So, 20 log K dB is constant for all frequencies.

The phase angle φ will be:

So, this shows, gain factor K contributes 0° to the phase angle plot.

2. Poles or Zeros at the origin

Consider a single pole at the origin,

Magnitude in dB will be given as:

This can be written as:

Now let us check the magnitude changes for the various values of ω.

Here, we have taken the frequency as multiple of 10, this indicates the change as 1 decade. This signifies the magnitude here decades at the rate of -20 dB/decade.

On the basis of this data the magnitude plot by 1 pole at origin is given as:

Here, the phase angle is independent of ω. Thus, the phase plot for 1 pole at origin is simply a line parallel to the x-axis.

So, here we have given an idea about bode plot and in the upcoming article we see some examples to construct bode plot.