In the previous article, we have seen what a bode plot is and discussed the standard factors.

Here in this article, we will see how the bode plot is sketched and later will explain the same with the help of an example.

The steps to sketch the Bode Plot are as follows:

1. Firstly, write the given transfer function in the time constant form.

2. Next, identify the factors like K, poles and zeros at the origin, etc. and for the magnitude, plot determine 20 log10 K dB and sketch the line on the plot.

3. Further, a line with appropriate slope is to be drawn that represents poles and zeros at the origin that passes through the point of intersection ω=1 and 0 dB.

4. Now, the point of intersection is moved to line 20 log K and draw a line in parallel to the previous line. This basically adds the constant K along with a number of poles and zeros at the origin.

Suppose, if ωc1 and ωc2 correspond to the two corner frequencies then the first change in slope will occur at ωc1 while the next slope will be changed at ωc2. This depends on the factor occurring at the corner frequency.

6. Further, draw the phase angle table by substituting the various values of ω between 0 to ∞ and calculating the resultant phase angle. Now, by using these points, sketch a smooth curve to get the desired phase angle plot.

Consider a unity feedback system with

and we have to sketch the Bode Plot for it.

So, the gain of the system:

So, step 1 of bode plot construction includes an arrangement of G(s)H(s) in time constant form.

Further, let us identify the factors,

Now, let’s proceed for the analysis to sketch the magnitude plot

Now, the intersection point is to be moved in ’20 log K’ line and a line parallel to -20 dB/decade is drawn. This line is continued till the point of occurrence of first corner frequency i.e., ωc1 = 2.

Further, let us go for the analysis to sketch the phase angle plot

First, convert the s-domain representation into the frequency domain 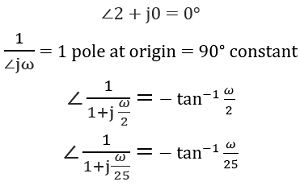 So, according to the above analysis, the phase angle table will be given as:

Now, using the magnitude and phase angle analysis, we need to construct the bode plot.

As we have to draw a straight line of -40 dB/decade from ωc1 = 2 and -60 dB/decade from ωc2 = 25, initially faint lines are drawn from the intersection point of ω = 1 and 0 dB, further parallel line is drawn to that line from the respective points.

Thus, the Bode Plot will be given as: 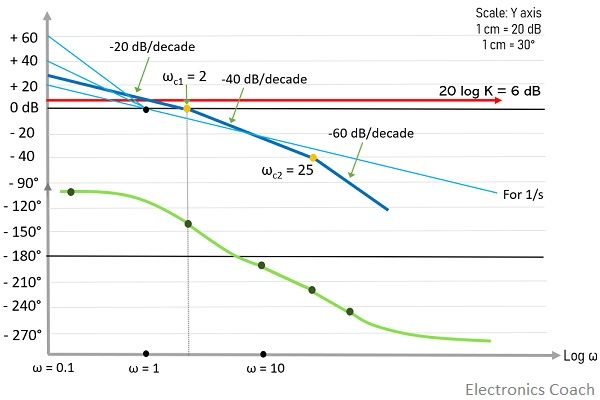 This is the desired plot sketched for the given transfer function of the control system that represents magnitude as well as phase angle against logarithmic of frequency.