A graphical method used for analyzing the location and movement of poles in the s-plane with the variation in the gain factor of the system is known as Root Locus. This technique is used to check the stability of the closed-loop control system.

So, in simple terms, a graph plotted for roots of a characteristic equation by varying the system parameter (generally gain) from 0 to infinity is called Root Locus.

Root Locus Analysis was proposed by W R Evans in the year 1948.

So, the root locus method helps to determine the movement of the poles in the s-plane with the variation in gain of the control system.

Suppose we have a closed-loop system as represented below:

For the above given closed-loop system, gain K is a variable parameter which is a part of the forward path of the system.

So, the transfer function for the above system will be given as:

We are already aware of the fact the characteristic equation of the closed-loop system is represented by equating the denominator of the transfer function to 0.

So, with the system gain K, the characteristic equation will be given as:

This shows that the roots of the characteristic equation given above now depends on the variable ‘K’.

So, this leads to taking us to the conclusion that if gain K is varied from – ∞ to + ∞ then every individual value of k within this range will provide a different set of locations of the poles in the s-plane.

Hence, root locus is defined as the locus of the poles of the closed-loop control system achieved for the various values of K ranging between – ∞ to + ∞. However, it is generally assumed to be between 0 to ∞.

Thus, the technique helps in determining the stability of the system and so is utilized as a stability criterion in control theory.

The characteristic equation of a general closed-loop negative feedback system is given as:

As s-plane is complex in nature, constituting both real and imaginary value. Thus, writing the above equation as:

This means G(s)H(s) is also complex. Thus, the above-given equation must be satisfied for each individual value of s in order to be present on the root locus.

Further, the two conditions of root locus are:

Angle condition: As we know,

On equating angles, we will get, 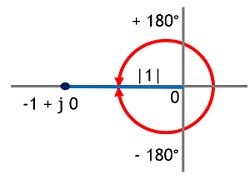 This signifies to be present on the root locus, the point must necessarily satisfy the angle condition. That means the calculated angle of G(s)H(s) at a point should be an odd multiple of ±180°.

Magnitude Condition: Further for the magnitude condition, the magnitude of both RHS and LHS must be equated for the equation G(s)H(s) = -1

It is to be noted that with the unknown value of K, we will not be able to determine |G(s)H(s)| at any point in s-plane. However, if we get an idea regarding the existence of a point in s-plane on the root locus then it must also satisfy the magnitude condition.

So, the value of K for a point whose presence on the root locus is obtained by the angle condition can be determined by the magnitude condition.

And the obtained value of K signifies the gain of the system for which a point on root locus acts as the root of the characteristic equation.

It is to be noted here that to apply the magnitude condition in order to get K, it is necessary that the existence of point on the root locus must be confirmed by the angle condition.

So, here we have given an idea about the root locus. In the upcoming article, we will see how the root locus is constructed with example.