It is sometimes referred as a lag network.

However, for this purpose also, the system specifications must be proper.

We have already discussed in our previous article that a phase lead network generates an output with a leading phase than that of the supplied input.

The phase lag compensator performs just reverse operation as that of the lead compensator. It introduces a phase lag in the steady-state output when the input signal is provided to it.

A lag compensator has zero and dominating pole. A dominating pole is the pole present nearest to the origin in comparison to all the other poles in the s-plane. And the poles and zeros must be present on the negative real axis.

The figure below represents the phase lag network: 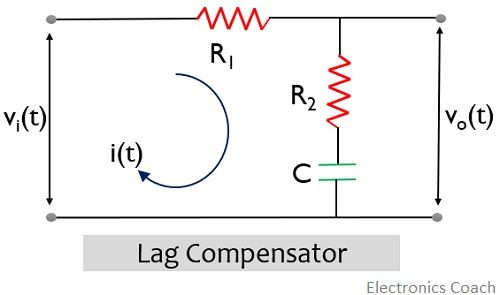 First, we will apply KVL in the above circuit. Suppose i(t) is the current flowing through the loop. Thus, for loop 1,

We know to determine the response of the system; its transfer function must be determined.

The transfer function is given as the ratio of output to input in the frequency domain.

So, further we will take the Laplace transform of the above equation,

On substituting the above value of I(s) in Laplace equation of input loop, we will get,

The general expression is given as:

Since β is greater than 1, thus pole of the transfer function is more dominating than the zero. The figure below represents the pole-zero plot of the lag compensator: 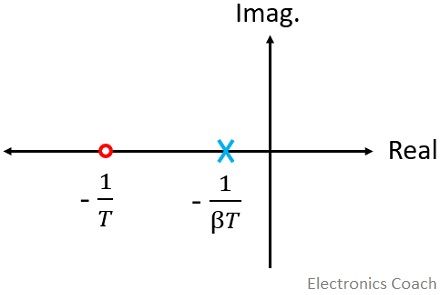 Generally, β is considered as 10. This is the reason when lag compensator is serially connected to the control system; then a negative phase angle is introduced.

We have discussed the transfer function of the lag compensator. Now proceeding towards determining the maximum lag angle offered by the compensator at a certain frequency.

Therefore, the magnitude will be given as:

So, the phase angle will be:

The phase angle of the lag compensator shows similarity with the lead compensator, which is given as:

where the only difference is β>1

Now we will determine the particular frequency at which phase angle ɸ is maximum,

Thus, it is clear that at this particular frequency, phase lag will be maximal.

Here ωm is the geometric mean of two corner frequencies,

It is to be noted in case of lag compensator that, it operates in a way to provide attenuation to high-frequency range. Thus in lag compensation, phase lag angle is of no justifiable use.