Definition: The Clapp Oscillator is an electronic device that consists of single stage amplifier and a phase shift network.The basic function of an oscillator is to generate the sinusoidal signal and the same work a Clapp oscillator does.

Have a look at the block diagram representation of Clapp Oscillator: 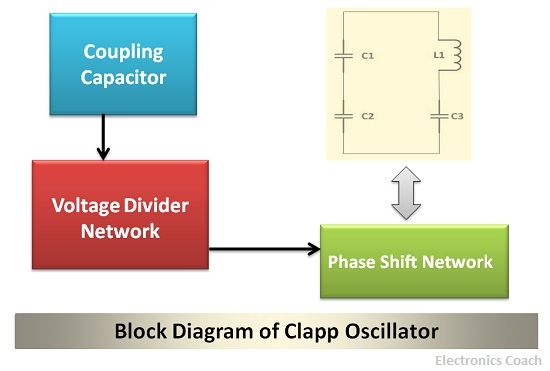 This is because the inductor present in the circuit starts getting charged, and thus it stores energy in the form of magnetic field. In this way, energy is converted from one form to another, and thus oscillations are maintained.

But due to losses possessed by capacitor such as dielectric loss and radiation loss in inductors causes the oscillations to become damped. Due to which a constant amplitude sinusoidal waveform remains a distant dream. 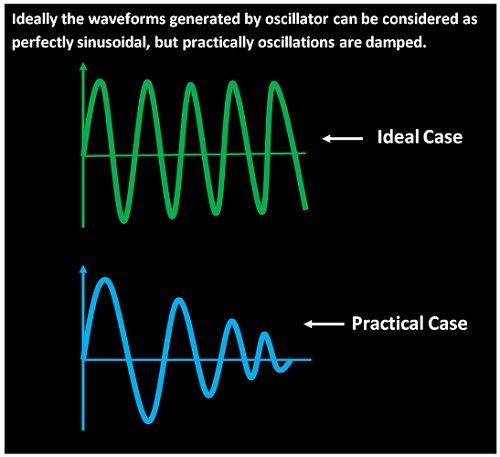 Usage of other Oscillators

With the help of some oscillators such as the Colpitts, Clapp oscillator, the losses suffered by capacitor and inductor can be compensated by using a single stage amplifier circuit.

Moreover, the feedback factor gets affected in Colpitts oscillator. This is due to the variation in the capacitance of the capacitor C1 and C2. This, in turn, affects the output of the oscillator circuit. Therefore, it is advantageous to use Clapp oscillator in place of the colpitt oscillator.

The Clapp oscillator working can be easily explained with the help of its circuit diagram. It is clearly evident that the circuit consists of single stage amplifier and a phase shift network. The single-stage amplifier consists of the voltage divider network. 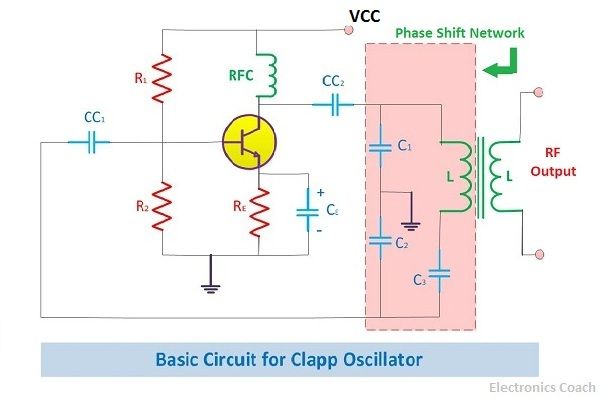 The emitter terminal of the transistor is connected with resistor RE which improves the stability of the voltage divider circuit. The capacitor is connected in parallel with this emitter resistor to bypass the AC in the circuit.

Thus, the feedback signal which already has a phase shift of 180 degrees is passed through the amplifier circuit. Then the complete phase shift will be 360 degrees which is the requisite condition for an oscillator circuit to provide oscillations.

Frequency of the Clapp Oscillator

The frequency of the Clapp oscillator can be determined or calculated with the help of net capacitance of the phase shift network. 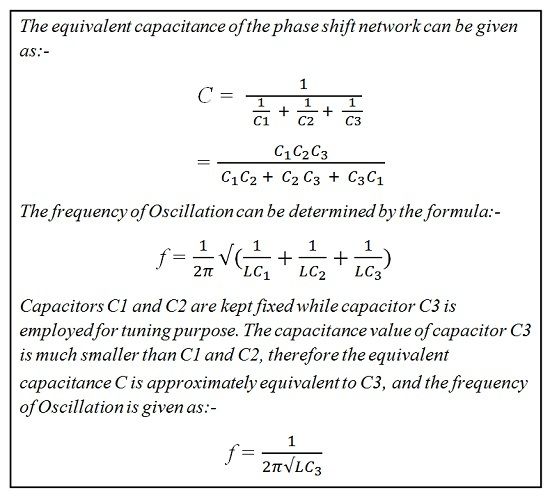 We can increase the frequency stability of Clapp oscillator by enclosing the entire circuit of the oscillator in a constant temperature zone. Besides, the supply of voltage should be provided by a voltage regulator such as zener diode.