Definition: Photodiode is a two terminal electronic device which, when exposed to light the current starts flowing in the diode. It is operated in reverse biased mode only. It converts light energy into electrical energy. When the ordinary diode is reverse biased the reverse current starts increasing with reverse voltage the same can be applied to the photodiode.

But in the case of photodiode the current can flow without application of reverse voltage, the P-N junction of the photodiode is illuminated by light and light energy dislodge valence electrons and the diode starts conducting.

The photodiode is made up of two layers of P-type and N-type semiconductor. In this, the P-type material is formed from diffusion of the lightly doped P-type substrate. Thus, the layer of P+ ions is formed due to the diffusion process. And N-type epitaxial layer is grown on N-type substrate. The P+ diffusion layer is developed on N-type heavily doped epitaxial layer. The contacts are made up of metals to form two terminal cathode and anode. 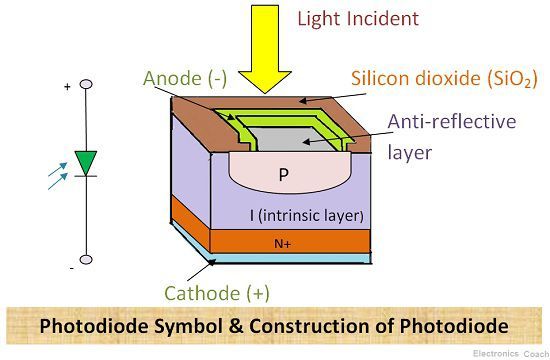 While on the non-active surface the light rays do not strike. The active layer is coated with anti-reflection material so that the light energy is not lost and the maximum of it can be converted into current. The entire unit has dimensions of the order of 2.5 mm.

When the conventional diode is reverse biased, the depletion region starts expanding and the current starts flowing due to minority charge carriers. With the increase of reverse voltage, the reverse current also starts increasing. The same condition can be obtained in Photodiode without applying reverse voltage. 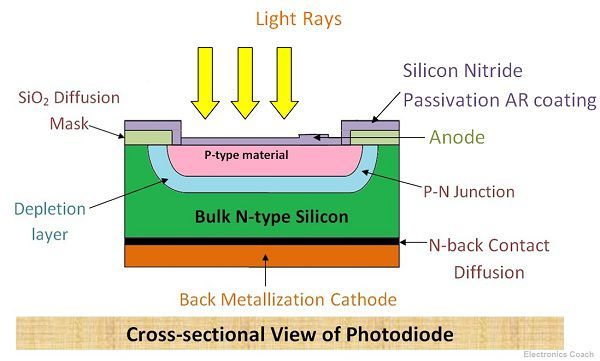 The junction of Photodiode is illuminated by the light source, the photons strike the junction surface. The photons impart their enrgy in the form of light to the junction. Due to which electrons from valence band get the energy to jump into the conduction band and contribute to current. In this way, the photodiode converts light energy into electrical energy. 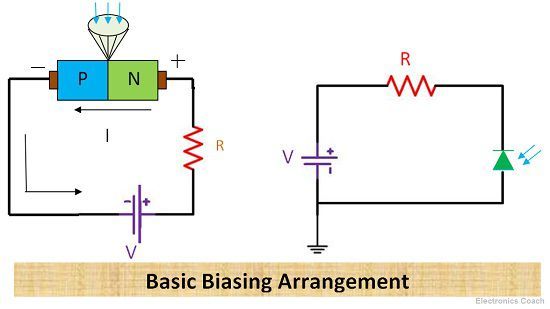 Modes of Operation of Photodiode

It operates in two modes that are Photo-conductive and Photo-voltaic.

When an external circuit is connected to photodiode after removal of reverse biasing, the minority carriers in both P, as well as N-region, return to their original region. It means the electrons which crossed the junction from N-type to P-type again move to N-side with the help of external circuit.

And the holes which crossed the junction and moved from P-type to N-type during junction fabrication will now again move to P-side with the help of external circuit.

Thus, the electrons can now flow out from N-type and holes can flow out from P-type thus in this condition they behave as voltage cell having N-type as the negative terminal and P-type as a positive terminal. Thus, the photodiode can be used as a photoconductive device or a photovoltaic device. 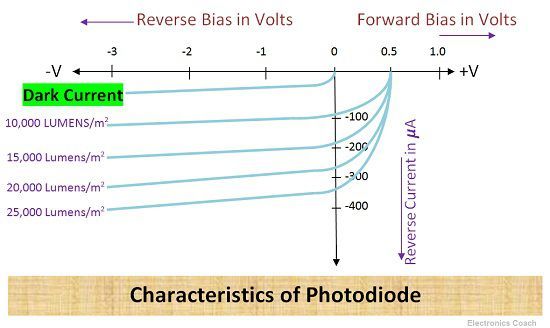 Where Isc is the short circuit current, V is positive for forward voltage and negative for reverse bias, Vt is volt equivalent for temperature, ɳ  is unity for germanium and 2 for silicon.

Photodiodes are considered as one of the significant optoelectronics devices which is extensively used in the optical fibre communication system.