Definition: LASCR or light activated SCR is a semiconductor device which turns ON when it is exposed to light. The constituent element of SCR is silicon, and it works like a rectifier, and thus, it is termed as Silicon Controlled Rectifier. The LASCR is a type of thyristor which is triggered by photons present in the light rays.

It is a three terminal device, consists of cathode, anode and gate terminal. The gate terminal is used when the electrical triggering is supplied to the LASCR. The advantage of using triggering of the thyristor by light is prevention from electrical noise disturbances. Thus, LASCR is considered to be one of the best devices.

The symbolic representation of LASCR is shown below: 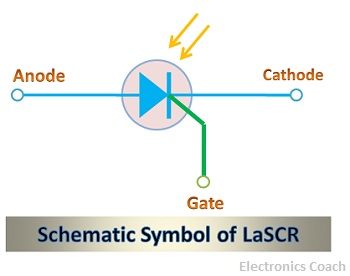 The constructional architecture of the LASCR is described below in the diagram. 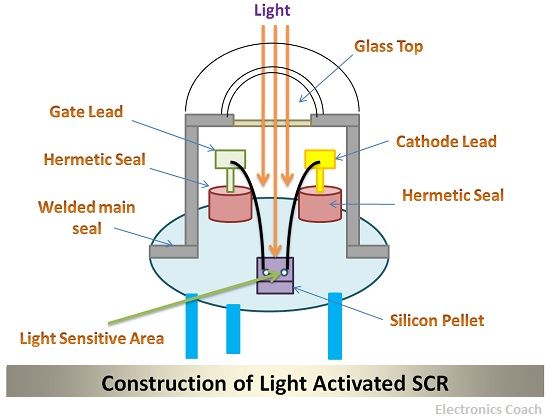 The LASCR works on the principle of photoconduction that is conduction due to photon striking the semiconductor surface. The LASCR is basically a thyristor; it is made up of semiconductor material. The light rays falling on the device are focused at one place to intensify it.

The more the intensity of light, the more will be the current through the LASCR. The internal architecture of LASCR consists of two transistors in such a way that the collector of one transistor is connected to the base of another transistor.

The light falling on the light activated SCR generates the electron from the valence band, and these electrons will enter conduction band. The electrons will move from collector of one region to base of another region, and then the cascading effect can be seen.

The best thing about Light Activated SCR is that they do not turn off even when the supply of external light is ceased. If you want to turn off the SCR, then you need to reverse the properties of electrodes.

The light-activated SCR (Silicon Controlled Rectifier) is also termed as light triggered thyristor (LTT). This is because the thyristor is triggered by the supply of light from the external source. Although, the combination of light source and the electrical signal is also used sometimes to trigger the thyristor. But in this, the electrical signal is applied through the gate terminal. And the light is incident directly to semiconductor crystal.

Operation of LASCR in the presence of light and electrical signal

The LASCR is a light-triggered device, but the combination of light signal and the electrical signal can also be used for its operation. In that case, two conditions will arise and that are as follows:-

Applications of the Light Activated SCR 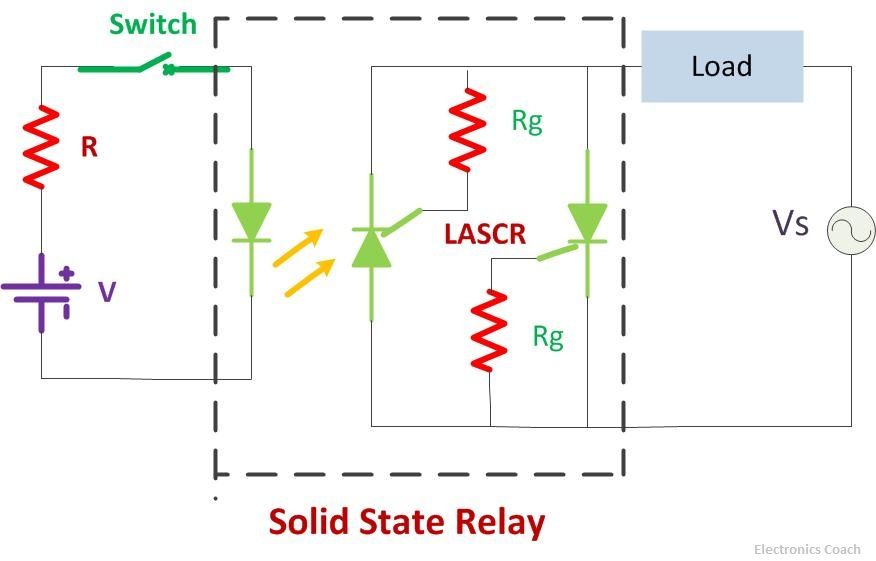 These relays find significant application in high voltage devices. In those devices, relays are used to couple voltage signal to high voltage equipment. This is very essential for coupling devices.