Definition: Photoresistor is a type of device whose resistance changes with respect to the intensity of the incident radiation. It has a tremendous ability to change its resistance in exposure to light. LDR is an acronym for Light Dependent Resistor. It is a non-linear device.

The photoresistor is also termed as the light dependent resistor or photoconductor as it displays the property of photoconductivity.

What photoconductivity basically is?

It is the phenomenon which improves the conductivity of the material by absorbing electromagnetic radiation. The radiation can be a gamma, UV, IR radiation or a visible light.

It is of two types either intrinsic or extrinsic Light dependent resistor.

This type of LDR is made up of doped semiconductor material. The doping constitutes a new energy level above the valence band. Thereby reducing the light energy required to excite the electron.

Basic structure and construction of Photoresistor

The photoresistor is composed of light-sensitive semiconductor material. Usually, it is made up of cadmium sulphide having negligible free electrons in the absence of any incident radiation.

The figure below shows the basic construction and symbol of photoresistor: 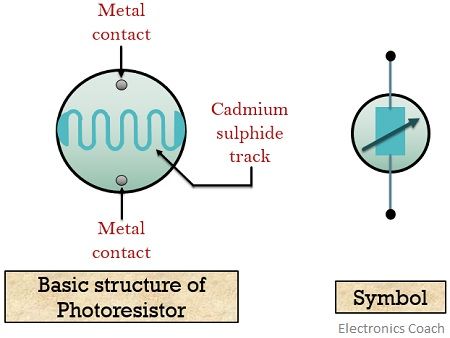 The device consists of a snake-like or zigzag pattern track which is made up of cadmium sulphide. The snake-like arrangement is done in order to get the expected power rating and resistance.

This track separates a pair of metal contact. The whole structure is placed in a plastic case so as to have direct exposure to the incident radiation. As it is required to change the resistance by the action of light in LDR, so the resistance of the metal contacts must be low.

As we are now familiar with the fact that LDR or Photoresistor are photoconductive materials.

Thus, higher the light energy, higher will be the presence of charge carriers resulting in greater conductivity.

Let us now see the approximate relationship between resistance and illumination, which is given as

E denotes the illumination and

A and α are constant

The manufacturing procedure and Cadmium sulphide decide the value of constant α. 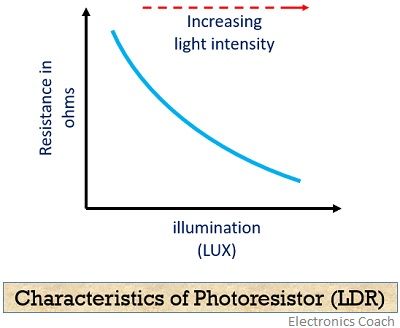 Here, we can see in the figure above, when the intensity of light is less i.e., in the darker region, the resistance is higher resulting in less conductive nature of the material.

In the introduction of Photoresistor, we have already mentioned that it is a non-linear device. This is so because the wavelength of the light that falls on its surface varies the sensitivity of the device. As there exist some photoresistors that do not respond to a certain range of light signal wavelength.

The variation in resistance is done in about 8 to 12 ms after the incidence of radiation. However, greater than 1 s is needed for the resistance to increase to a higher value in case of less intensity of light.

In other words, we can say when the device is exposed to a dark region from certain illumination level, it does not increase rapidly. This is known as Recovery rate of resistance.