Nyquist criterion or Nyquist stability criterion is a graphical method which is utilized for finding the stability of a closed-loop control system i.e., the one with a feedback loop. This criterion serves as a crucial way for design and analysis purpose of the system with feedback. Thus, it finds major application in Electronics and Control System Engineering.

The principle of Nyquist criterion was independently proposed by an electrical engineer of German origin, Felix Strecker in the year 1930 at Siemens. However, the graphical method for the determination of stability was given by Swedish-American engineer Harry Nyquist at Bell Laboratories in 1932.

The stability theory by Nyquist is the basis of analysis and design of control system for the frequency domain approach. It is regarded as a graphical procedure to illustrate the stability of the system.

Suppose F(s) is a single-valued mapping function given as:

Where G(s)H(s) is the open-loop transfer function of the system.

We have already discussed earlier that for a system to be stable all the zeros of 1 + G(s)H(s) must exist in the left side of the s-plane and none should be present on the right side. Whereas the exact positioning of the zeros in the left half is unknown.

However, the stability of the system is analyzed by knowing the location of zeros of 1 + G(s)H(s) in the s-plane.

So, Nyquist suggested that despite analyzing the exact location of the zeros, if we examine the existence of even a single zero in the right half of s-plane then it will make the system unstable.

Thus, according to Nyquist the functional region of analysis for stability is the right-hand side region of s-plane.

Therefore, Nyquist suggested that in spite of any arbitrary path τ(s) in s-plane, a path τ(s) must be selected that encircle the whole right half of s-plane.

The path must be such that it must begin from s = + j∞ and continued till s = – j∞ along the imaginary axis. This should be a semi-circle of the radius ∞.

This semicircular path is called the Nyquist path. 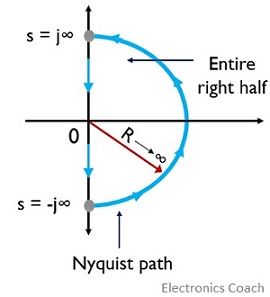 Basically, to find the number of closed-loop poles on the right half of s-plane the overall right half must be mapped into another complex plane with the use of mapping function F(s) = 1 + G(s)H(s).

So, N must be determined which is the number of encirclements of mapping around its origin.

Thus, to have absolute stability there must be no zeros of 1 + G(s)H(s) in the right half. This means for a stable system; Z must be 0.

This is the Nyquist stability criterion.

Generalized Nyquist Path and its Mapping

Therefore, a modification in the Nyquist path is done so that the poles get bypassed with the selection of semicircle having a radius that tends to 0 around them and encircling the complete right half of s-plane.

Hence, Nyquist path must be selected according to the situation of poles of G(s)H(s).

Consider that there are two poles of F(s) on the imaginary axis at ± jω1 and one pole at the origin.

Then the Nyquist path will be: 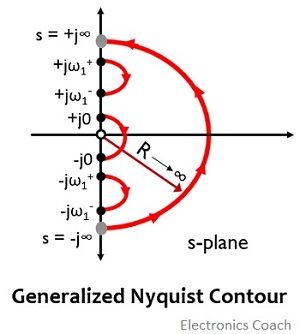 Let us see how the modification is performed: 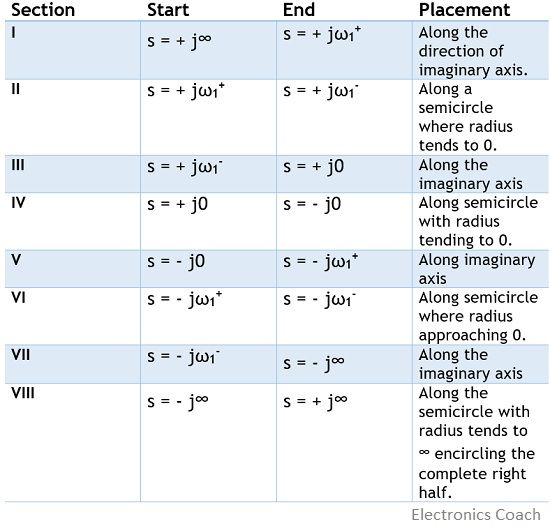 So, if we consider section I

Now, rotate the plot from the starting point in order to reach the terminating point. In this way, we will get the mapping of section I in F-plane.

In a similar way, mapping of all the sections is done and a closed-loop plot i.e., Nyquist plot is obtained. Lastly, the encirclements of -1 + j0 are counted and checking is done for N = -P.