Routh-Hurwitz stability criterion is an analytical method used for the determination of stability of a linear time-invariant system. The basis of this criterion revolves around simply determining the location of poles of the characteristic equation in either left half or right half of s-plane despite solving the equation.

The stability of a control system basically defines its ability to reach the steady-state and remain there till the time, specific input is maintained despite the variation in the other factors associated with the system.

Thus, to check whether the system is stable or not, the conditions of stability criterion must be satisfied.

This stability criterion is known to be an algebraic technique that uses the characteristic equation of the transfer function of the closed-loop control system in order to determine its stability.

According to this criterion, there is a necessary condition and a sufficient condition.

Therefore, we need sufficient condition to determine whether the system is stable or not.

Suppose the transfer function of the closed-loop system is given as:

: a and b are the two constants here.

Moreover, the roots of this characteristic equation are the poles of the system with the help of which the stability of the system is decided.

It is to be noted here that before checking the stability of the system using the Routh-Hurwitz criterion, a basic analysis must be done.

This general test is simply done by analyzing the characteristic equation, here all the roots of the equation must be present on the left side of the s-plane.

The necessary conditions are discussed below:

These two are not sufficient conditions to prove the stability of the system.

Initially, the sufficient condition to have the poles in the left half of s-plane was proposed by Hurwitz. It was known as Hurwitz criterion and states that all the subdeterminants of the Hurwitz’s determinant must be positive.

So, because of these disadvantages, Routh proposed another technique for determining the stability of the system, this method is generally known as the Routh-Hurwitz criterion or Routh’s criterion.

Hence, according to Routh, for a stable system the necessary and sufficient condition is that in a routh array, all the terms that are present in the first column must be of the similar sign. This means no change of sign (either from positive to negative or negative to positive) must exist in the first column of the array.

Therefore, in case if there is any sign change then such a system becomes unstable.

This is said on the basis that the overall sign changes in the first column signify the total number of roots lying on the right half of the s-plane, thereby making the system unstable.

Thus, in simple words, we can say, that for a system to be stable, each coefficient of the first column of the array must have a positive sign. If it is not so, then it is an unstable system. And the number of sign change that makes the system unstable shows the number of poles that are present on the right side of the s-plane.

This is known as the Routh-Hurwitz Criterion.

What is Routh Array?

Till now we have used the term coefficients of routh array so many times. But the basic question is what is routh array and how it is formed.

Basically, under the Routh-Hurwitz stability criterion, Routh proposed a technique by which the coefficients of the characteristic equation are arranged in a specific manner. This arrangement of the coefficients forms an array which is known as routh array.

Let us now see how a routh array is formed. Consider the general characteristic equation:

For the routh array, the first two rows are written from the characteristic equation directly while the rest of the rows are formed with the help of previous rows.

It is to be noted here that if in the characteristic equation, n is odd then the first row of the array will hold the odd coefficients. While if n is even then there will be even coefficients present in the first row. 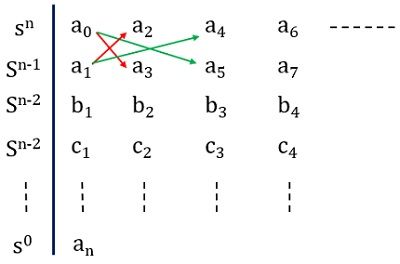 So, the third row will be formed using the first and second rows. Let us see how

In a similar way after forming the 3rd row, we can use 2nd and 3rd row to form the 4th row

Therefore, we have to continue the process until the time we get the coefficients for s0, which is nothing but an. In this way, we get routh array from which the stability of the system is predicted.

Now there are two special cases that cause the failure of the Routh’s test:

This is all about checking the stability with the help of the Routh-Hurwitz stability criterion.