Definition: Remote Terminal Unit (RTU) in SCADA systems is a microprocessor-based electronic device present at geographically distributed remote locations in order to facilitate communication of various devices within the distributed SCADA system. It consists of input-output hardware and communication interface for remote sensing and controlling of ongoing processes.

The sole purpose of an RTU present at the remote site of the SCADA system is to send all the collected data and information to the central station with the help of sensors, monitors, production processes, etc. so that it can be stored and monitored.

We have discussed in the previous content of the introduction to SCADA systems that SCADA systems permit the interconnection of various units which are dispersedly present at various remote locations to handle industrial control processes.

The remote terminal unit acts as a crucial component of SCADA systems. It establishes and maintains the connection between the different elements of the system to facilitate communication where a wired connection cannot be established. As it supports the communication of remote field equipment thus it is named so.

In the initial phases, even before the arrival of the SCADA system, RTUs were used for remote telemetry purposes with integration to the central computer.

So, at that time, RTUs were hardwired devices that were electronically designed for fixed functions such as responding to the serially received numeric codes. So, the early remote terminal units were functioned to read and transmit the current input and status values and to generate contact outputs according to the control message.

But at that time, the developed systems only supported accurate monitoring and not fulfilled the purpose of effective controlling. However, further innovations in that field made possible the conveying of change of status of a process to remote monitoring station as well as printing it with reported date and time.

Further, with the advent of microprocessor-based technology, the manufacturers incorporated the microprocessor and microcomputer logic within the RTUs. And this further enhanced the flexibility of industrial control systems by providing better operational characteristics and performance.

The reason behind this was that microprocessor chips offered fast computing features and reduced the overall cost, this improvised the performance of the system.

The figure here shows the architectural representation of the Remote Terminal Unit: 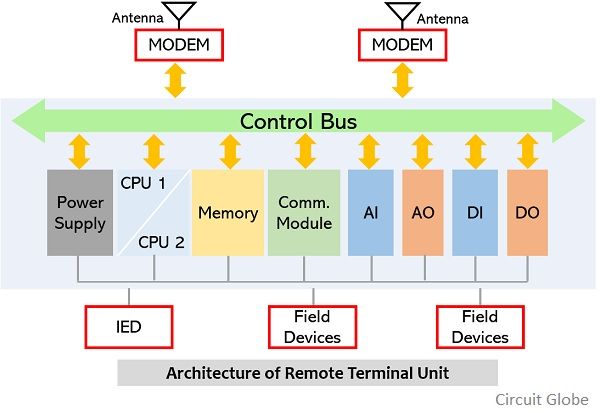 The inbuilt central processing unit nowadays uses 16-bit or 32-bits microprocessor with the memory capacity of 256 kilobytes. It consists of 3 communication ports with ethernet links and the real-time clock is used for the overall controlling of the system.

The use of watchdog timer provides real-time checking of regular execution of processes. This watchdog timer gets reset on regular basis and in case the resetting is delayed then the timer flags error.

As it is clear from the figure that dual CPUs are incorporated here with dual power supply. And among the two CPUs, one serves the purpose of primary and other as standby. So, in case the primary one fails, the system is automatically triggered to the standby CPU.

For the uninterrupted operation, continuous supply of power is required by the RTU, but the unit is separated with a large distance from the point where supply is actually present. So, to facilitate uninterrupted operation in case of power failure, an alternate power source with battery backup is provided to the unit. For low power RTUs, solar panels are mostly used while sometimes thermoelectric generators are used according to the availability of gas pipelines.

The applied analog input is generally a variable voltage or current, varying in direct proportion to the process under measurement. The different analog inputs are 0-1 mA, 0-10 V, ± 1.5 V, 5 V, etc.

The analog inputs must specifically include a multiplexer, signal conditioner, sample and hold circuit, ADC and bus interface. The features of analog input modules are:

These are used to deal with variable quantities such as graphic recording instruments or strip charts. It basically transforms the digital value received from the CPU into analog form using DAC. Further, this analog representation controls the actuators.

The basic features of analog output modules are:

It has isolated voltage or current source that is used to have a check-on over the position of remote contact (i.e., whether it is open or closed) at the RTU site. Depending on the contact position the status of various devices like electrical breakers, alarm conditions, etc. can be determined.

The digital output module of the RTU usually drives the output voltage at each respective output channel such as high current capacity relays so as to switch the power on and off.

The approaches used for driving are as follows:

A remote terminal unit can be interfaced to multiple control stations and intelligent electronic devices using different communication media like RS485, RS232, ethernet, microwave and satellite, etc. When a communication interface is maintained between two ends then either side can initiate the data transfer so as to have synchronized data transfer with the least possible traffic issues.

Also, if the multiple RTUs within the SCADA system wants to share a common communication line then using multi-drop scheme this can be done. As unique addressing is provided to each unit and response will be understood depending on their polls and commands.

A noteworthy point over here is that the design of remote terminal units in today’s world depends on the pre-decided standards by International Electro and Technical Commission, American National Standard Institute, Institute of Electrical and Electronics Engineer. In the architecture, there is supportability towards pluggable modules.