Supervisory Control And Data Acquisition is the full form of SCADA. SCADA system is a computer-based control system used in industrial processes that facilitates monitoring and controlling of various critical industrial equipment involved in manufacturing, developing and fabrication, etc.

A SCADA system works in a way that the sensors involved in the system takes the process parameters and changes it into a proportional electrical signal. This signal is then changed into the required digital form and is further provided to the SCADA server with the help of various devices following different rules with the desired communication technologies involved.

As in the late 1960s itself, IC was invented that can help in designing complex as well as a sophisticated electronic device. So, by the use of available technologies, SCADA systems were built that facilitated the presence of a human operator. According to the design of the system, this operator can update the information in real-time relative to the remote processing being monitored.

What is a SCADA System?

SCADA is a crucial part of our daily lives still people are generally unaware of its existence. Usually, the operating system used for the operation of SCADA systems is DOS and UNIX.

We know that in large industrial processes, various equipment is involved and with each equipment, a large number of processes are involved. And as each separate equipment has its individual output thus it is quite difficult to monitor each ongoing process. 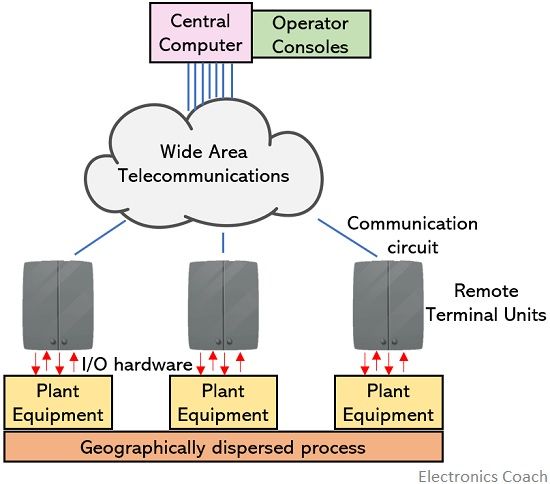 There are some major components of the SCADA system, let us discuss the operation of each one separately.

HMI is used as an acronym for human-machine interface and is given this name as it is a combination of software and hardware that permits human and machine interaction in the SCADA environment. This device aims to provide efficient system operation with proper controlling of the system which is under monitoring.

RTU stands for remote terminal unit and is used for remote telemetry and controlling of process. It is a microprocessor-based device that forms a connection with sensors, transmitters, and other equipment.

The RTU when connected with sensors and monitors at the remote site allows transmission of data to the central station where the task of collecting and monitoring is performed. Generally, serial ports (like RS232) are used to form communication between RTU and central stations.

IED stands for Intelligent Electronic Devices. These devices are basically microprocessor-based controllers, relays and regulators, etc. that can serially communicate with the other devices of the SCADA system.

More specifically, IED is a device that consists of microprocessors and holds the ability to transmit and receive data or control to or from any external device. The external devices can be transducer, relays, control units, etc.

The Programmable Logic Control (PLC) is a solid-state device that controls the processes and equipment of the system. It is generally connected to the sensors and changes the sensor output signal into a digital signal. PLCs are used in place of RTUs as various advantages are associated with PLCs.

The advantages of PLC over RTU are as follows:

This system acts as a centralized server that maintains communication between various equipment of SCADA like RTU, sensors, etc. and HMI software.

In the case of the smaller SCADA system, there is a single PC present in the supervisory station, but for large SCADA systems, there are multiple servers and distributed software applications.

So, in these systems, the multiple servers are configured to continuously control and monitor the operations for enhancing the integrity of the system when any severe failure occurs.

The Network Management Server (NMS) is an application designed for monitoring of software as well as hardware components present in the network. With the help of the network administrator, the NMS manages an individual component of the network. It helps in recording the data from remote points and reports it to the system administrator.

The following functions are performed by NMS:

As we have discussed at the beginning itself that SCADA plays a crucial role in our day to day life. Thus, it mainly finds applications in electricity generation, transmission and distribution, in turbines and power systems, water distribution systems, waste-water treatment along with traffic control systems.