The analysis of the control system in this approach is based on the state of the system. Thus it is called so.

And the transfer function of the system is specified in terms of the ratio of frequency domain representation of output to that of input.

Despite having a transfer function approach why do we need state-space analysis?

The conventional method was easy to apply in order to analyze the system but at the same time, there were some major drawbacks associated with it.

The drawbacks associated with the conventional method are as follows:

Thus, we can say state-space analysis overcomes the limitations of the transfer function approach.

What is meant by ‘State Space’?

The analysis of the system using conventional methods like root locus or bode plot etc. utilizes the transfer function approach where the system is analyzed on the basis of output and input.

In this approach, the interior conditions of the system are not taken into consideration and are restricted to only a single input single output.

It represents every smallest past information of the system in order to predict response. Basically a state separates the future i.e., the response of the system from the past.

Thus more simply we can say that to have the accurate response of the system for any given input, the state holds the information related to the history of the system.

Therefore, at any instant of time, the state signifies the combined effect of each element of the system. Hence the state is a vector in nature that provides the values from each component associated with initial conditions of the system.

Due to vector nature, it is generally known as a state vector.

As we have discussed that it is a vector term thus the various variables that constitute state vector are known as state variables.

Suppose the system is having two states x1(t) and x2(t). 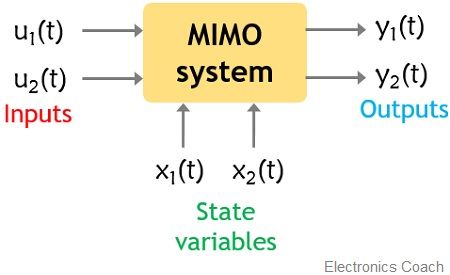 We know that state variables show variation with time. Thus writing the differential equation of the state variable, we will have

Thus the matrix representation will be given as: 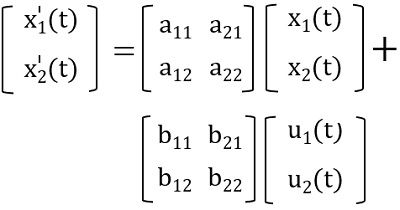 The output of the system will be represented as the linear combination of the state of the system and the applied input. Thus is given as:

The coefficients c and d taken over here are constants. Thus writing the above equation in the form of a matrix, we will have:

Therefore, in general form, we can write it as:

Thus the two equations combinedly form the state model of the linear system:

In the state model, we have considered 2 states, 2 inputs and 2 outputs of the linear system. But generally, we can define the complete system model of a linear time-invariant system as:

It is to be noted here that as A and B are the coefficients associated with the state equation, thus are the properties of the system. Therefore, the elements and the structure of the system are responsible for the determination of A and B.

So, the steps involved in the modeling procedure are as follows:

As we have discussed at the beginning itself that to overcome the disadvantages associated with the conventional approach of analysis, the state-space analysis was introduced. But the major drawbacks concerning state-space analysis involves complex technique and requirement of high computations.