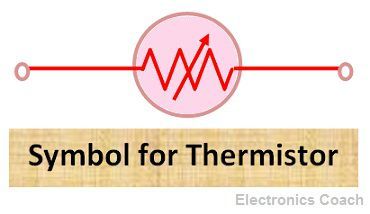 Thus, the thermistor is a semiconductor device which possesses high negative temperature coefficient (about -0.04 per 0C at room temperature of 250C). 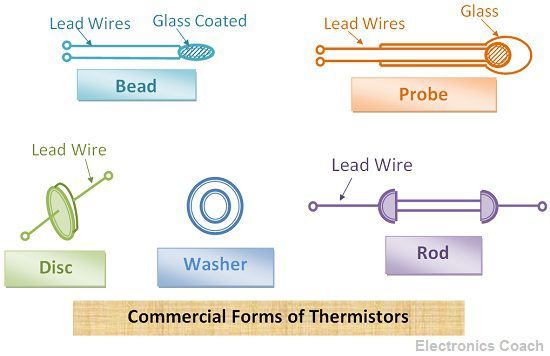 After this process, these oxides are mixed in proper proportion with the binders and then pressed into the desired shape. Then, finally, the process of sintering is done. The electrical terminals can be embedded either before sintering or after sintering. If it is done after sintering it can be baked afterwards.

The range of thermistors at room temperature (250C) varies from several 100 Ω to megaohms. They can be manufactured in very small shapes in the form of beads, rods and discs.

We have already discussed above that thermistor works on the principle of negative temperature coefficient. Although the decrease of resistance with the increase in temperature is undesirable in many electrical and electronic circuitry, it is significant for temperature detection circuits. 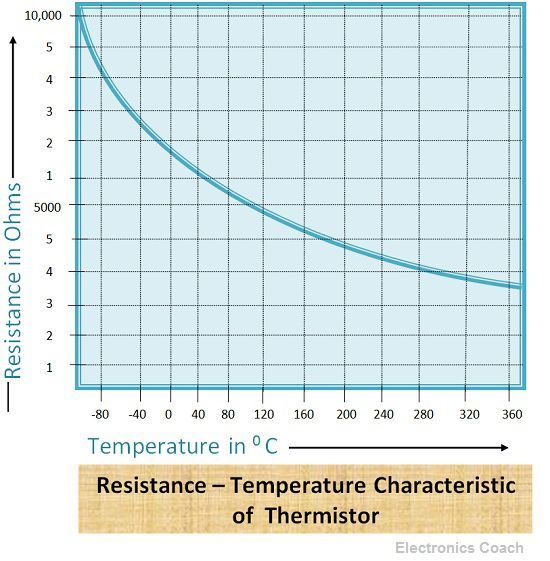 Where α and β are the constants, depending upon the material used and manufacturing techniques.

The above equation can be re-written to derive the relationship between resistance and temperature.

Where R1 and R0 are the value of resistance at temperatures T1 and T0 respectively and β is the thermistor constant, it is expressed in kelvins and it is of order 4000. The temperature T0 is usually taken as room temperature i.e. 250C or 298 K. The value of β changes with the increase of temperature, but if it assumed to be constant the relationship between temperature coefficient and resistance and temperature can be obtained.

where α is the temperature coefficient.

The thermistors are available in different types on the basis of operating temperature and response time. The conventional thermistors are likely to get affected by moisture and outer atmospheric conditions. If we want to use in some application where we require the device to get protected from outer conditions then hermetically sealed thermistors should be used. They are sealed so that the moisture does not interrupt its operation.

The small current flowing through the thermistor does not cause a sudden rise in voltage, but when the current is increased beyond a particular value, the voltage starts rising. A point is reached after which the voltage starts falling. 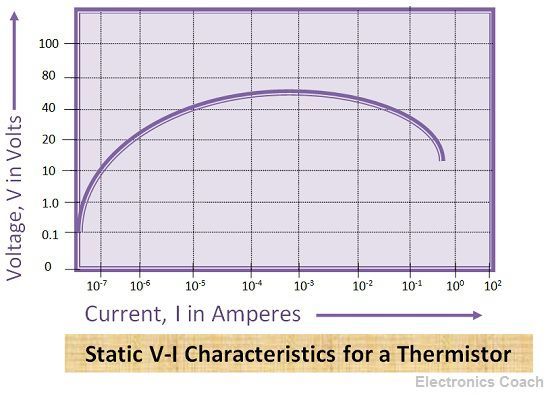 The reason behind this is the heating effect increases the current up to a particular value, and thus the voltage drop starts decreasing. It can be understood more clearly with the help of the diagram above.

If the operating temperature becomes too high, the PTC loses its properties and starts behaving as NTC thermistors i.e. negative temperature coefficient resistor. Thus, it is the limitation of PTC Thermistors that it is suitable for proper working only until a particular temperature.